XAN2009 is a large concert organ (Op. 1877) installed by Klais in the Xian (Datang) Concert Hall in the Shaanxi Performing Arts Center (main pic from Klais website.) (This is the city famous for the terracotta warriors, unearthed in 1974.) This is one of the few new concert halls in China which had the benefit of proper planning for the organ installation in both its architectural and acoustic design.

The fourth manual is a ‘chinesiche Solo’ manual, consisting of only four stops: Xiao 8′, Erhu 8′, Koudi 4′, and Suona 8′ Although an interesting novelty, three of these four traditional instruments had already been incorporated into organs built in Shanghai in the 1850s and 1860s (see SHA1857 and SHA1858).

Although mentioned in the text of Keys to the Kingdom (p. 315) this installation was not included in the Census (Appendix) through an editorial oversight. 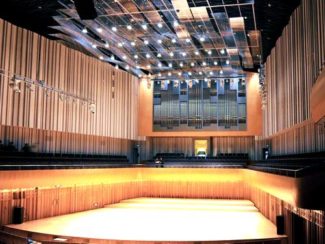