ZNJ2008 is a medium-sized concert organ built by Rieger for the Henan Art Center in Zhengzhou, capital of Henan Province. (Pic from builder’s website.)

This art center is another of the ‘grand theaters’, designed by Carlos Ott who also designed the ‘grand theater’ in Hangzhou (see HCH2006). It is managed by a subsidiary of the Poly Group (http://en.polyculture.com.cn/business/&c=17&i=67&comContentId=67.html)

The specs may be seen at: http://www.rieger-orgelbau.com/details/project/Zhengzhou/?lang=en

The organ was installed in 2008, and the dedicatory recital was played on 24 May of that year by Helmut Binder. The Project has not had the opportunity to survey this installation. 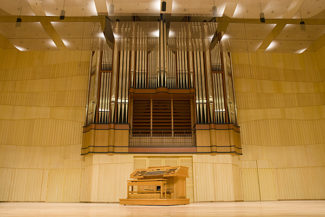