Another Bamboo Organ in China: WHN1846

In an exciting new discovery, we have received word from our colleague, Prof. Francesco Maglioccola in Wuhan, that a letter written in 1845 (and published in 1848) has been found relating to Fr. Giovanni Battista Torre da Omegna, and concerns the organ Fr. da Omegna built for the little church at Tianmen, WHN1846.

The letter, written by Fr. Giuseppe Novella da Carpasio, mentions that the pipes of WHN1846 were made of canne cinesi — bamboo!

This pushes back the frontier of organs with bamboo pipes in China by more than a decade before the great ‘Bamboo Organ of Tungkadoo’ in Shanghai (SHA1857). Did the Shanghai builders (Jesuits) know of Fr. da Omegna’s organ? Did Fr. da Omegna (a Franciscan) know of the organs of Fr. Diego Cera (an Augustinian Recollect), built with bamboo pipes in the Philippines in the first quarter of the 19th C.? Fr. Cera died in 1834, so it is unlikely that any of them ever met (besides belonging to different orders, and living in different administrative areas.) We will probably never know for certain, but this is a major find in history of adapting bamboo to pipe organs in Asia.

We are also grateful to our graduate student, Francesco Teopini, for helping with the translation of Fr. da Omegna’s letter:

“This church [at Tianmen], which anywhere in Italy would move [one] to compassion, is nonetheless the biggest and most beautiful, or at least the least miserable and the least dirty of the whole Vicariate; and from this, you can get an idea of all the other inconveniences. It is enough to tell you that it has no windows, and that it would not receive any light, were it not for a big hole in the middle of the roof, from where, when it rains, water pours down as in the streets. One of our priests, Father Giovanni Battista Torre da Omegna, has made a beautiful organ, taken here for a miracle of European intelligence, with [pipes of] bamboo [canne cinesi], which are not unlike the ones in India. As a matter of fact, it is so sweet and so harmonious, and it was built with such mastery, that not even an Italian church would dislike it. People came from different places to see it…” 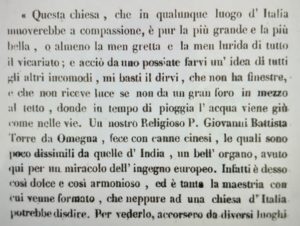