One of the more enigmatic figures in the history of the pipe organ in China is the Vincentian lay brother, Charles Paris. When I wrote Keys to the Kingdom, the furthest back I could trace any account of Brother Paris as an organ builder was an article published in 1963 by Vincentian historian Octave Ferreux: “Histoire de la Congrégation de la Mission en Chine”, published in Annales de la Congrégation de la Mission, Vol. 127, in that same year.

Recently, while searching for something else (as it always happens), I finally found the source of Ferreux’s information. This source is itself only a secondary source, and much of it was taken from the second volume of Mémoires de la Congrégation de la Mission en Chine (Paris, 1911-12). But it offers somewhat more detail about Paris’ life and his involvement with PEK1787a and PEK1787b than I had access to previously. This is a monograph by the Vincentian (Lazarist) China missionary, Alphonse Hubrecht (1902-49), originally published in Beijing in 1939 as La mission de Pékin et les Lazaristes. Hubrecht’s study was translated into English by Henk Hippolyte de Cuijper CM in 2013; and subsequently edited for publication by John E. Rybolt CM in 2021. (This English version is: “The Mission of Peking and the Vincentians”, and while not as accurate a translation as one could hope for, can be downloaded for free here: https://works.bepress.com/john_rybolt/133/download/).

Charles Paris was born at Verderonne, Picardie, in the diocese of Beauvais, in 1738. As a young man he “had worked under the best watchmakers of the capital [Paris]”, and was “also a mechanic [engineer] and a carpenter.” Readers of Keys to the Kingdom will know just how closely watch and clock making on the one hand, and organ building on the other were linked in the seventeenth and eighteenth centuries, and how many missionaries combined these professions. Hubrecht goes on to say that for some years Paris “was a ‘hermit’ at St. Cyr, where Mr. [Joseph] Ghislain [CM, 1751-1813], who himself was living in the former boarding school of Madame de Maintenon, surely [must have] met him, directed him, and attracted him [to the Vincentians].” Thus, Paris was already 45 years old when he finally joined the Congregation of the Mission as a lay brother on 2 June 1783, taking the name of Joseph (St. Joseph is the patron saint of China, as well as that of carpenters.)

The Vincentians had been appointed to take over the work and properties of the China Jesuits, whose order had been suppressed in 1773 by the papal brief, Dominus ac Redemptor, of Clement XIV. So Paris departed for China, along with Ghislain, and the future superior of the French mission in China, Nicolas Joseph Raux CM (1753-1801), from Brest in March 1784:

Brother Joseph Paris, who is to accompany these two priests… has been destined to go to Beijing as an artist, [and] he has ‘followed the team of the peal of bells’ [i.e., studied music]. He has taken harpsichord lessons…

This suggests that Paris had, perhaps, minimal training as a musician before joining the Vincentians. The three arrived in Macau on 23 August, after a remarkably fast passage. From there they were summoned to Canton (Guangzhou), which they left for Beijing on 7 February 1785, and where they arrived on 29 April. Raux wrote to his family, that

We traveled about 600 leagues [he means something like the lieue de Paris of about 3900 meters], partly by river, partly by land. Mr. Ghislain and I have been all the time in excellent health; we did not experience any need during the trip. On our arrival we found a beautifully, completely equipped house, [and] a very nice church, built in the enclosure of the greatest and most powerful emperor in the world: they are the house and church of the French former Jesuits.”

Raux is describing here the first Beitang (North Church), built within the precincts of the imperial city in 1703 for the French Jesuits; and his account also suggests that Paris did not enjoy such good health on the trip, probably due to his age. Paris made his vows in Beijing on 14 June 1785, but little is heard of him until 1788, when Raux reported in his annual letter that

Brother Joseph Paris succeeded the late Father [Jean-Matthieu Tournu] de Ventavon [SJ] (on 27 November 1787) in the position of watchmaker and engineer at the [imperial] palace. This brother, who is talented, has just produced a clock which can run for three months without the need of winding up the weights again. We hope the [Qianlong] emperor will be pleased with it.

Finally we hear of the two organs, but only in a posthumous appreciation written by Ghislain in a letter dated “Beijing, 20 October 1804”:

He was never found idle, but working and praying all the time. He combined very exemplary piety and regularity with an almost universal talent: he made several big clocks, two big chiming clocks [carillons], a small and a large pipe organ; moreover, he made for the palace an automaton four or five feet high, which could write the praises of the emperor in four different languages, that is, in Chinese, Tartar, Mongol, and Tibetan. He printed for us here not only several useful things, but he himself made many fonts that he needed, just as beautiful as [those that] could have been made in Europe.

Since this is the only account of the two organs, it is impossible to put a precise date on them at present; but I have always assumed that they must have made early on in his Beijing years along with the clocks, as the comments on his health and its decline grow more frequent in the 1790s. And it is most unlikely (as Ferreux suggested in 1963) that they would have been made after the abdication of Qianlong in 1796 in favor of his son, the Jiaqing emperor, who was immediately a persecutor of the missionaries and Christianity in general. Despite this, Paris was raised to the sixth grade of the mandarinate (probably Grade 6B, also given to Buddhist and Taoist priests) in 1793 by Qianlong. Perhaps someday more accurate dates for his two organs will be possible; but I use Raux’s 1788 letter that describes some of the clocks as a baseline for this.

Interestingly, Hubrecht raised the point that the two organs might not in fact have been made by Paris at all. Somewhat playing devil’s advocate, he pointed out that

these small miracles…could well have been articles imported by way of Macau. Who knows? In that case the brother would have had only the minimal merit of skillful repairing, or of happy adaptation. But why cast doubt over Mr. Ghislain’s testimony [in the 1804 letter], where we can feel his care to be truthful, and not desirous of vainglory?

Paris died in Beijing on 6 September 1804, and was buried in the French cemetery at Zhengfusi (no longer extant.) His organs, his clocks, and his grave have all disappeared; but he himself is not forgotten. 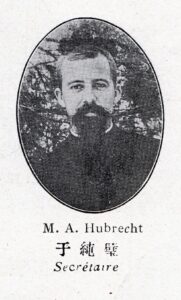 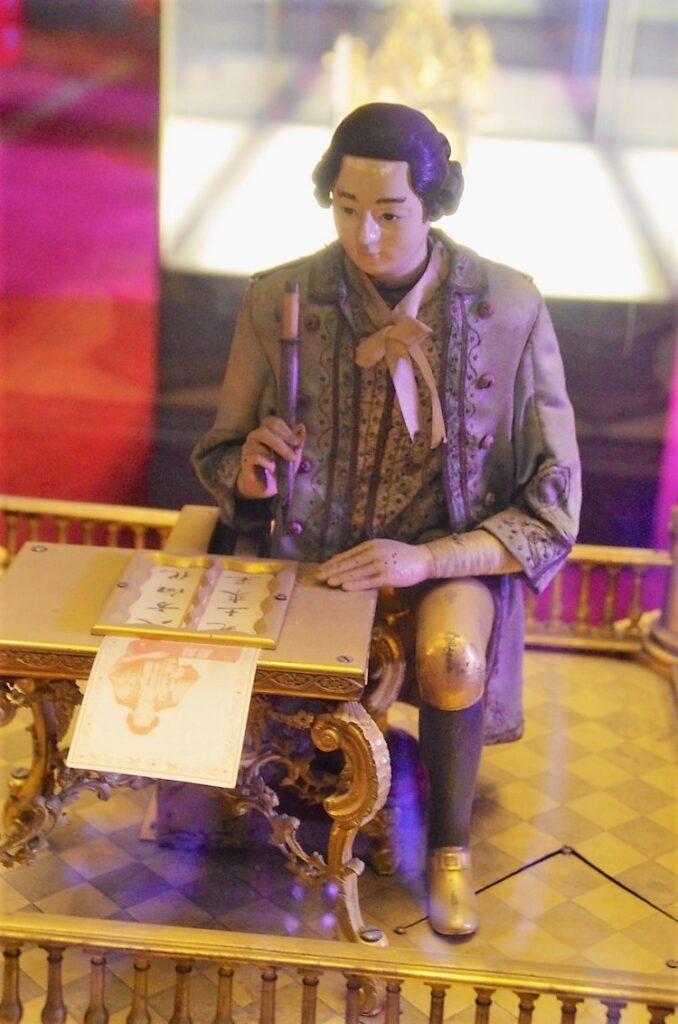 An automaton made by Williamson of London in the late 18th C., now at the National Palace Museum, Beijing (i.e., the ‘Forbidden City’). Unlike Paris’ automaton, this one can only write in Chinese.