FCW1931 is the small bamboo organ reported by Hong Kong organ enthusiast, Peter Cheung, in 1975. In his book, Pipe Organs, Electronic Organs, and Organists, and also in a letter to the South China Morning Post (24 February 1975), Cheung reported that in 1931 he had seen a “bamboo organ, quite small, with all bamboo pipes, built by foreign missionaries…in a small church in Foochow, Fukien Province.”

On p. 272 of Keys to the Kingdom I questioned whether this could have been one of François Ravary and Léopold Deleuze’s bamboo organs of the early 1860s. It would be quite extraordinary to think that there were further builders in late 19th or early 20th Century China of such instruments after the death of Deleuze in 1865, and that of Ravary in 1891. One cannot rule out the remote possibility that Deleuze’s student apprentices in Shanghai might have carried on the tradition; they certainly are known to have continued building normal reed organs/harmoniums at the Tushuwan orphanage near Zikawei. But there is no evidence that new bamboo organs continued to be built after Deleuze’s death, aside from the fact that Ravary continued to tinker with those already installed until 1891.

While Cheung did not identify the ‘church’ in question, I have assumed cautiously that this was probably a Roman Catholic church or chapel, although there is actually no evidence for this assumption. Or is there?

Recently I revisited a short report, published on page 3 of the North-China Daily News on 20 January 1896, about the consecration of a Roman Catholic chapel in Fuzhou:

“In its account of the consecration of the new Roman Catholic Chapel at Foochow, the Echo mentions that Bishop Masot[1] presented the ground and the organ; the French consul, M. Frandin[2], originated the idea and worked hard to get it carried through; Count P. de Barthelémy[3], on a visit to Foochow, gave a comparatively large sum to start subscriptions for the purpose; Mr. Fairhurst[4] and Count de Galembert[5] guaranteed the outlay until the subscriptions were collected; Bishop Garnier[6] of Shanghai gave the altar-piece and the candlesticks; and Sir Robert Hart[7], Bart., contributed $400; besides many others.”

The Shanghai paper abstracted this from the Foochow Daily Echo, which ran from 1884 to 1911 (or later), the original of which I have not yet located. It would be very interesting to see this, as it might contain more detailed information, for example, the name and dedication of the ‘chapel.’ When I first read this around 2013, I printed out an A3 copy, marked the paragraph, and wrote at the top of the page “Fuzhou – probably a harmonium”.

Yes, it states that the organ was procured by the local bishop, Salvator Masot. No, it does not identify the church (although it was clearly not St. Dominic’s Cathedral.) But the name that jumped out at reading it again was that of Bishop Valentin Garnier from Shanghai, someone who in fact knew both Ravary and Deleuze, the masterminds of the bamboo organ workshop at Zikawei, very well.

Garnier appears once in Keys to the Kingdom, in an account by another priest written in December 1881:

“We spent the Feast of St. Francis Xavier [3 December] at Dongjiadu with Monsignor Garnier. The Cathedral was very well decorated, and Father Ravary inaugurated four stops of his organ, the only ones which were ready under the circumstances. When the other twenty are in place, it will truly be an instrument worthy of a cathedral, even in France.” (p. 172.)

The organ referred to here is SHA1881, Ravary’s final expansion, to a III/24 instrument, of the ‘Bamboo Organ of Tungkadoo’ that he and Deleuze had originally built a quarter-century earlier (SHA1857). So, Garnier was very much in the thick of the matter of the bamboo organs.

An appealing hypothesis emerges here: could Garnier have off-loaded one of the half-dozen small bamboo positives, built by Deleuze and his students in the later 1850s and early 1860s, onto Bishop Masot? He was generous enough with the altar and candlesticks, and it must have taken a good deal of ecumenical goodwill on his part to do this, considering the sorry history of relations between the Jesuits and the Dominicans in China over two tempestuous centuries.

All this is unprovable, at least at present. If we had been told more by Peter Cheung, we could rule in or out that the bamboo organ was seen in a Roman Catholic church. Failing that, what we have is a report of an ‘organ’ installed in 1896 in a Roman Catholic chapel in the right city, Fuzhou. (At this date, ‘organ’ generally meant reed organ.) The instrument, if built by Deleuze, et al., would have been about thirty years’ old at that point: but Deleuze built things to last, as his one remaining positive, now in Paris in the Musée de la Musique, shows (SHA1858). Cheung, showing up in 1931, thirty-five further years later, describes an instrument that answers well to what we know of Deleuze’s small bamboo organs. And he was evidently told that it had been “built by foreign missionaries” and thus was not an imported instrument, and probably of considerable age by that time.

A published study such as Keys to the Kingdom is not the place for flights of fancy speculation such as this. But the internet is just the place, and the Project puts forward this line of inquiry and hopes someday to improve on it when more information is available. 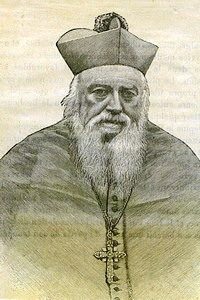