The Project has proposed that this might be one of Ravary and Deleuze’s Shanghai-built instruments of the 1850/60s (see SHA1857 and SHA1858). If not, it adds another layer to the complex history of pipe organs with bamboo pipes in Asia (see Update in What’s New).

Mr. Cheung was also the author of a book (in Chinese) on the subject: Pipe Organs, Electronic Organs, and Church Organists (Hong Kong: Sheng Tao Press, 1975), where he gave a slightly longer account of the bamboo organ in Fuzhou.

Given the date of his seeing the organ in Fuzhou (1931) and the later date of his book, it would be interesting to know if Mr. Cheung had been one of William Charlton Blackett’s workers at the organ factory on Mosque St. in Hong Kong before 1941. 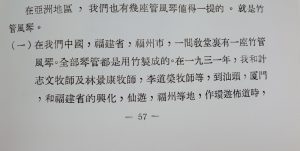 Peter Cheung’s account of the 1931 sighting of a bamboo organ in Fuzhou. 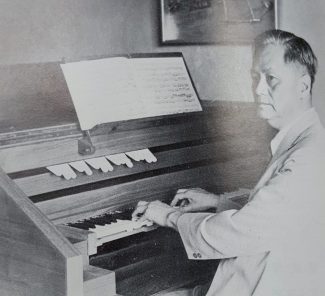