An organ built for St. Stephen’s Church (Anglican), Pokfulam Road, by William Charlton Blackett. The date is estimated, as one Chinese source says that the installation occurred in the “15th year” of the pastorate of the Vicar, a Rev. Li, who began his service at St. Stephen’s at 1918. The church was built in 1888, and in the early 20th C. made do with a harmonium purchased from St. Peter’s Church at the time of the installation of HKG1908.

No other details are available, except that the organ was a gift of a council member of nearby Hong Kong University, which often used the church. The specs must have been very similar to HKG1933a and other organs built by Blackett as stock models at this time.

St. Stephen’s was demolished in 1965, and a modern church now occupies the site. Further information about the church is available here (in Chinese only): http://www.sscc.edu.hk/index.php?i=1&s=9

Because of the vague state of information about this organ at the time of publication, it is mentioned in Keys to the Kingdom (p. 285), but not listed in the Census (Appendix). 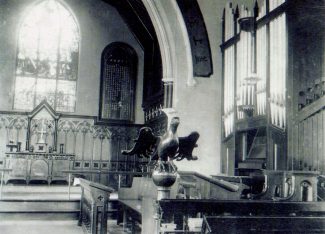