This installation was originally another II/11 stock model organ, built in Hong Kong by William Charlton Blackett for St. Paul’s Chapel (now ‘St. Paul’s Church’, of the Chinese Anglican Sheng Kung Hui Ming Hua Seminary.) The specs were presumably identical (or nearly so) to those of HKG1933a and HKG1934. This organ was, however, the only split-chancel organ that Blackett is known to have built in Hong Kong.

The chapel was built in 1911 for St. Paul’s School, up the hill from the building, and expanded in 1935 (the organ was part of this expansion.) During the Occupation of Hong Kong it was used by the Japanese. The organ was left partly derelict after the Second World War, although it appears it was working to some extent into the 1970s (an organ recital was given by a Mr. Phillip Cooper on 23 July of that year.) Eventually most of the pipes were discarded and the lower part of the organ cases was turned into a storage area.

In 2005 it was converted into a Rodgers hybrid by MPOS, and the few salvageable pipes were restored by Diego Cera Organ Builders. The present instrument retains only 21 pipes of the original Open Diapason 8′ (front façades, now renamed Principal), and 16 pipes of the Bourdon 16′ (side façades, facing each other, and now renamed Subbass).  Six additional stops with pipes were added by MPOS, and the rest are digital voices. Further information is available here: http://www.mpos-organs.com/case-study-hong-kong

The SKH website (available in Chinese only) for the church is: http://dhk.hkskh.org/stpaul/index.aspx 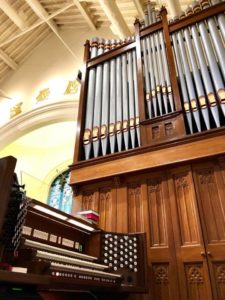 The current Rodgers console and the right-hand chest (pics thanks to Erma Sandy Lee.) 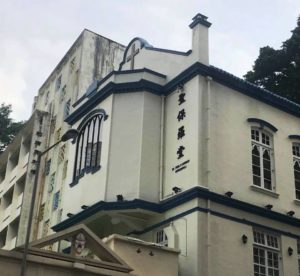 St. Paul’s Church (Chapel), from the corner of Glenealy and Lower Albert Road. The church is on the upper floor of the building. 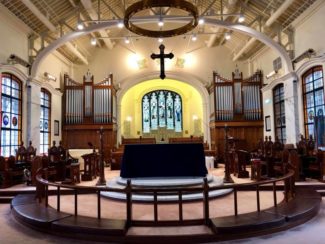