HKG1973 was the first organ installed anywhere in Mainland China, Hong Kong, or Macau since W. C. Blackett’s HKG1939. It is mentioned in Keys to the Kingdom (p. 308), but because next to nothing was known about it and no information was available, it was not included in the Census (Appendix).

It now can be confirmed that it was in place in the Roman Catholic Cathedral at least by May 1973, and that a dedicatory recital was played at that time by Flemish organist Stanislas Deriemaeker.

All the manual stops are divided at a/b-flat into Bassus (B) and Discantus (D), and thus there are two drawstops  for each rank. The specs are:

Even the builder cannot tell the Project anything about the origins of the organ today. In a 2016 communication, Seifert replied that they could find no hint of an instrument built for Hong Kong. The firm thinks that it may have been a gift of a German diocese or charitable organization (Caritas has been mentioned), or it may have been a second-hand instrument that found its way to Hong Kong around the time that the Trice/Blackett organ in the gallery (HKG1921) was discarded. Seifert stated that “between 1960 and 1980 we…built some dozen of this kind of Positives.” A number of these can still be found in Japan, including almost-identical organs in the Gion Catholic Church in Hiroshima, built in 1967, and the Kichijoji Catholic Church in Tokyo built in 1974.

Stanislas Deriemaeker at an electronic organ console at the Roman Catholic Cathedral in Hong Kong, on a return visit in 1994. 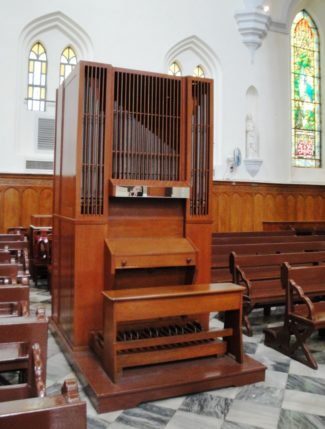