HKG1986, built for the newly-opened Hong Kong Academy for Performing Arts, was Rieger’s re-entry into the China market since the firm’s last installation half a century earlier in Ichowfu (today’s Linyi) in 1936 (see ICF1936).

The specs may be accessed at: http://www.rieger-orgelbau.com/details/project/Hong_Kong_Academy/?lang=en

This installation was a by-product of the contract for the even larger Rieger, eventually installed in the Concert Hall of the Hong Kong Cultural Centre (see HKG1989). British organist Geraint Jones (1917-98) was hired by the Hong Kong government in 1981 as a consultant for the latter project, and he also drew up the specs for HKG1986 at that time. Jones played the dedicatory recital himself on 17 October 1986. 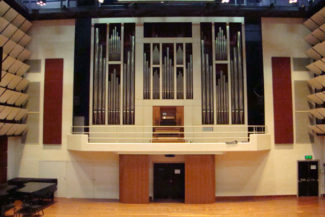