An organ reported in Kunming, in Yunnan Province, probably dating to the 1920s and known only through an account from the last days of the Second World War written by a US serviceman named Donald G. Pribble.

In June 1945 Pribble was in Kunming and visited “the University” (either Donglu University, founded in Kunming in 1922, or more likely the Protestant-affiliated China Central (Huachung) University, which spent the years 1939-45 in ‘exile’ in Xizhou, west of Kunming, before returning to its campus in Wuhan) where:

I met an American music teacher and, of course, the first thing I asked her was if there was an organ any place in China. To my surprise she told me there was one right in this very town and [that] it’s the only one in Free China! She wrote me a letter of introduction to a Chinese friend of hers who is a member of the church, which is Catholic, where the organ is. This man was a PhD and got his schooling in the States. He was very interesting to talk to…All the priests there are French, including the organist. The organ is a two-manual job that has to be pumped by a long pole at the back. I was surprised that it had such good tone despite the fact that it needed some work done on it. It was about 25 years old and was made in Paris. I played on it for a while, then asked the priest to play for me. His technique wasn’t so good, but he was very good at improvising. He had been in China for 10 years, but his home was in Paris. He didn’t look over 30 years old. After we finished playing he took me into the courtyard and introduced me to about half a dozen other priests and the bishop [probably Jacques Rouchouse MEP, 1870-1948]…Next Sunday, the bishop, who has a long white beard down to his belt, is celebrating his 50th year in China…The organist asked about the organs in the States and asked whose music was the most frequently played. I told him Bach was first, but that the composers of France ran a close second. He seemed quite pleased at that.

While the date of this organ in the Census is based on Pribble’s report, this is only a guess. What can be said is that while the other two organs associated with the Missions Étrangères (MEP) in Sichuan Province (CHD1929, CNK1929) undoubtedly came up the Yangtze River to Chongqing (and then one of them overland to Chengdu) this would not have been possible in the case of KMG1920. This instrument would have had to have been sent to French Indo-China, and then loaded onto the Haiphong-Kunming Railway, a narrow-gauge line completed in 1910, and one of the great engineering feats of the French colonial period. 1911 is thus a terminus post quem for this instrument.

Sometime between 2008 and 2014, the church (now called Sacred Heart Church) was demolished and a new, grandiose building erected on the site. Another photograph of the old church can be found here: https://michaeljbechtel.com/travel/%E9%9B%B2%E5%8D%97%E7%9C%81/ 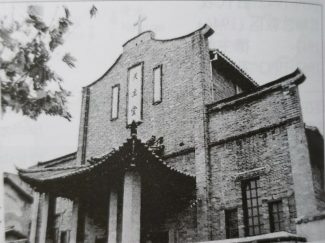