Although there are few clues as to the 1743 specifications, the new organ was placed centrally in the gallery and the bellows moved to the south-east corner of the organ loft, in line with standard Central European practice. Later accounts strongly suggest it had a pedal division. It is not known how much of Tomás Pereira’s original 1680 organ and its 1711 rebuilding may have been recycled here. Johann Walter s.j. (1708-59) noted at the end of 1743 that:

“In the choir loft [of the Nantang], provided with four columns, white-marbleized and richly gilded, you will see a magnificent and valuable organ, covered with various paintings, some for the sake of contemplation of the saints, others which depict for pleasure flowers and branches.”

Bahr was in fact the son of an organ builder, and had evidently learned his father’s trade. In 1738 Gottfried-Xavier von Laimbeckhoven, the future Bishop of Nanjing (1707-87), called Bahr “an outstanding organist from the Bohemian Province [ein vortrefflicher Organist aus dem Böhmischen.]” And a year later, Augustin von Hallerstein described Bahr as “a Bohemian from the Silesian Province, whom we can call a master of the organ and the art of musical composition” [welcher sich auf der Orgel und in der Musicalischen Componier-Kunst einen Meister nennen darff.]”

This is the organ which became the subject of the ‘queen’ of Chinese writings of the 18th Century on the topic of the pipe organ. In 1759 Hallerstein invited his friend, the poet Zhao Yi (趙翼, 1727-1814), to visit the Nantang.  In his essay, “The Western Telescope and Musical Instruments”, Zhao described being introduced to the organ by Hallerstein. “This organ,” wrote Zhao,

“is in the upper part [tower] of the building, and is placed on top of a wooden case.  A man with a beard sits there and plays the [organ]. You hear the sounds of all musical instruments, of sheng, xiao [end-blown flute], heng [a stone chime], di [transverse flute], zhong [bells], gu [a drum], nao [hand bells], zhuo [a small bell used in the army for signaling.] Tens of lead pipes are suspended from the case. The foot of [each of] the [façade] pipes is several inches from the ground. Two wooden panels [slider and table] are bored with holes, which match up with the pipe holes [top board]. At the south-eastern corner a man is pumping the bellows for air to pass through the pipes. Each pipe is connected by a copper thread [pull-down wire] to a string [tracker] inside the instrument. If these strings [trackers] are pulled, then the instrument produces sounds of different pitches. The lead pipes are of different sizes and qualities of timbre. Thus when someone plays the organ, and all the pipes are sounding, you can hear the sounds of all musical instruments…solemn, stirring, powerful… It is truly astonishing. There is also a bell [Tomás Pereira’s clock-carillon of 1677] which sounds all by itself. It rings automatically at times, along with the sounds of the organ and various instruments……the ‘harp’ sounds like a cold spring, the ‘pipa’ sounds like snowflakes floating through the air…

“When I go up to the [organ] loft, I am astonished to see only one old man with a beard is sitting there and playing. It seems as though a hundred people are making music…the bellows breathes, [rising and falling] like the morning and evening tide…This, too, is wonderful…there are so many intelligent people in the world, and we should broaden our horizons…Knowledge is not limited to the Confucian school. I lingered and enjoyed so much as to forget to go home. I was not aware it was already eight in the evening, and the city gate would be closed. Arriving back home, I have to record what I have heard and seen today, and write it down [reclining] on my pillow.” (Zhao Yi, Yan pu za ji (檐曝杂记.))

It is assumed that the ‘old man’ playing the organ was in fact Florian Bahr, and that the bellows were being pumped by Johann Walter.

In 1760, and again in 1766, Hallerstein gave the same ‘tour’ to the Korean ambassadors from the Joeson court, who came to Beijing every three years. On the 1766 visit, the organ was seen and heard by Hong Taeyong (홍덕보/洪大容, 1731-1783) who, commenting on Kim Changop’s account of the earlier organ (PEK1711), remarked that:

“In the middle [of the façade] where there are ‘cylindrical tubes’ that ‘look like pillars or beams’ these are [organ] pipes made of a metal like brass, a tin-lead alloy.  Among these pipes the biggest ones are the ‘columns’ or ‘rafters.’  They are placed upright at different heights. Their musical sound is like that of reed instruments [sheng], so they need to be of such a large size.  With other pipes of various lengths, they are larger [or smaller] according the increase [or decrease] in their pitch.  Each of the eight notes [of the Western scale] have interconnections [ratios] among themselves, something like the variation of the “Eight Trigrams” (bagua, 八卦), which itself is multiplied to contain 64 hexagrams. And the gold and silver painting is [utilized just] to make an extravagant or luxurious impression.”

(Hong’ remark about “hexagrams” refers to the diagrams at the center of the Taoist-Confucian oracular system of the yijing (I Ching). It was part of Chinese music theory to relate the musical scale (the pitches, or lu) to the hexagrams, and the first codification of 64 lu, or transpositions, was made in the 2nd century B.C. by Jiao Yanshou. Thus the pitches of the scale could be related to the oracular system.)

The organ was destroyed, along with the church, on the night of 13/14 February 1775 in a fire widely believed to be a case of arson. (The photo below is of the new church, constructed in 1776, and destroyed by the Boxers in 1900.) 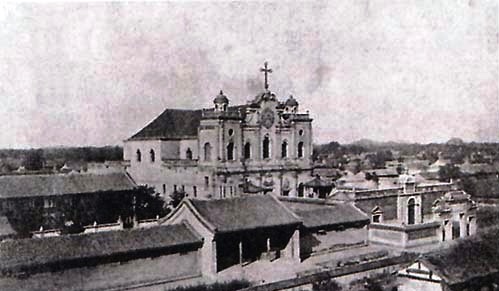