An organ installed in the New ‘Old’ Beitang, built to replace a church destroyed by fire in 1864. This building was designed by an architect named Bourrières, who based his Neo-Gothic church on a design laid out by a French military surveyor who had come with the Anglo-French forces, a Lieutenant de génie (engineer) named Bouvier, in 1861. The cornerstone of the new church was laid on 1 May 1865. This new ‘Old Beitang’ was consecrated on 1 January 1867 (as the Cathédrale de Saint Sauveur) and the seat of the diocese was moved there from the Nantang.

A “beautiful large organ” was ordered from Fermis et Castay in Paris, and was in place by 1869, if not earlier. (The offices of Fermis et Castay were on the same street as the Vincentian Maison-Mère, Rue de Sèvres 87 and 95, respectively.) Recent information suggests it was a two-manual organ, probably with a single 16′ pedal rank, and about 12 stops in total (see What’s New, May 2020).

Nothing about the installation of this organ (PEK1869) is known, except for a cryptic comment in the Vincentian financial accounts for the year 1869/70: a “dépense extraordinaire” for “l’orgue fameux de Mgr. Guierry”, amounting to 1,590 taels 73 cents (approximately 2,200 ‘dollars Mex’, although it is difficult to know the exact value of the silver tael at this time, and whether this was the ‘Shanghai’ or the ‘Customs’ tael.) Edmond-François Guierry (1825-83) was the procureur (‘business manager’) of the Vincentians in China. It appears that he had ordered and paid for the organ himself, and when in 1869 he was transferred to Zhejiang Province, he threatened to take the ‘famous’ organ with him, unless the Beijing Vincentians paid either him or his new province for it. An 1876 reference to the instrument states that it was “constructed at Peking”, but this seems unlikely.

The New ‘Old’ Beitang was pulled down between 1909 and 1911. Visitors to Beijing may want to know that the site of the church is now incorporated into the Zhongnanhai (the ‘Kremlin’ of Beijing) and is completely inaccessible and surrounded by massive walls. The best view of the area is from the ramparts of the tuan cheng, or ‘Round City’. 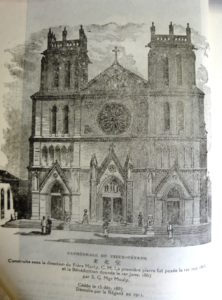 Another late 19th C. engraving of the New ‘Old’ Beitang.