The Anglican Church of All Saints, Tianjin, was constructed in 1903. An electro-pneumatic organ (II/10) was built and installed by R. Spurden Rutt in 1913-14.

We would know nothing more, except that the church suffered a catastrophic fire in May 1935. This led not only to a full rebuilding of the church, but also for a request to Rutt to build a new, and essentially duplicate organ, for which see TJN1937.

In the Census (Appendix) to Keys to the Kingdom, the two organs are treated as a single instrument, installed twice, and thus there is no entry for TJN1937. It seems now that it is better to consider them as separate installations, especially as the exact stop list of TJN1913 has not come to light. 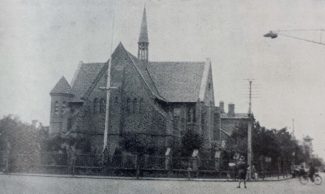