TJN1925 is the fourth and final organ reportedly bought in 1925 by Jean-Marie Planchet for Vincentian churches in the north of China, and described by Father Wang Jizhi in 1991  (see PEK1925a for details.)

In 1930, the family of Brian Power (see TJN1904)  began to attend Mass at the Chapel of this Jesuit-run college (the Institut des Hautes Études Industrielles et Commerciales) founded in 1923-24. Brian Power’s mother, Grace, was quickly recruited as the organist and choir director for the college chapel (see photo, apparently taken from the organ gallery.)

It remains unexplained why this pipe organ, purchased by a Vincentian procureur, wound up in a Jesuit institution. Some accounts in Chinese suggest that this organ was originally intended for the massive Romanesque Laoxikai (or Xikai) Cathedral, completed in 1917 and dedicated to St. Vincent de Paul (see: http://www.tjwh.gov.cn/whysz/0704yinyue/yinyue-0201.html). But it appears to have nevertheless wound up in the Jesuit college Chapel. 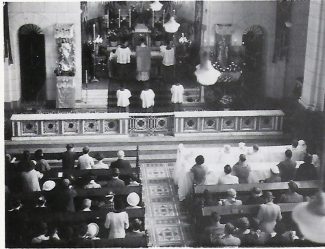