An early English-language account of SHA1857: Edward W. Syle and ‘The Bamboo Organ of Tungkadoo’

Readers of Keys to the Kingdom, and some visitors to this website will understand how important an installation SHA1857 has been to The Pipe Organ in China Project. A casual inquiry about this instrument led to the creation of The Project in 1989, and it continues to be our mascot, our totem, our starting point and origin.

Recently, while looking for something else, I came across a news clipping that appears to contain one of the earliest English-language mentions of SHA1857. This appeared in an issue of the newspaper, The London and China Telegraph, which was published in London and ran from 1859 to 1921. The paragraph in question (quoted from an earlier issue of the Boston Evening Post) appeared in the issue for 28 July 1867 (it was a weekly paper), and so ten years after the construction of SHA1857. Here it is: 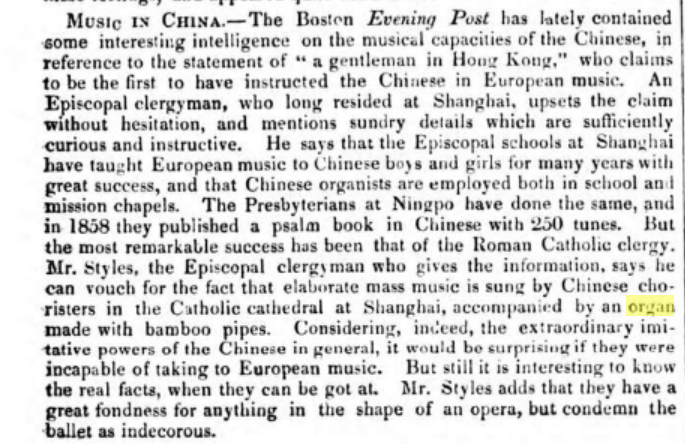 The first thing I noticed was the name of “Mr. Styles, the Episcopal clergyman.” Just as some of my Roman Catholic readers have been shocked to discover that Fr. Ravary and Br. Deleuze made many visits to Holy Trinity (Anglican) Church to inspect and study the two-manual and pedal Gray and Davison organ (SHA1856) while planning SHA1857, in like manner it seems that the reverend gentleman of the American Episcopal Church mentioned in the newspaper was familiar with the musical activities of the Jesuits in Shanghai, which is of course the subject of my recent book, François Ravary SJ and a Sino-European Musical Culture in Nineteenth-Century Shanghai (CSP, 2021).

Investigating further, I found out that “Mr. Styles” was actually the Rev. Edward W. Syle (1817-90), born in England, but moved to the United States where he pursued his university education (Kenyon College, 1840-43) and attended theology school (Virginia Theological Seminary, 1844). Syle and his wife went out on the China mission in November 1845. Syle had the honor of laying the cornerstone of Holy Trinity Church in 1848. He was certainly on good terms with the Roman Catholic clergy in Shanghai, and mentions in his journal a visit to the newly-completed ‘Tungkadoo’ (dongjiadu, the Cathedral Church of St. Francis Xavier) in June 1856, and a long conversation he had with Mathurin Lemaître SJ (1816-63), “a Frenchman whom I had met here ten years since”. Syle does not, however, seem to have attended the inauguration of SHA1857 on 15 August 1857, a great pity for The Project!

Eventually, Syle grew disenchanted with what he saw as a disorganized and visionless mission endeavor, and returned to the US briefly on furlough in the mid-1850s, and then again in 1862, where he involved himself with improving the notoriously bad working and living conditions of Chinese immigrants. He returned to Shanghai in 1868, and then in 1874 was appointed US Consular Chaplain at Yokohama, as well as Professor of Ethics and History at the Imperial University in Tokyo. He ultimately returned to England in 1885, his first and final home, where he was affiliated with the ECMS until his death. It also turns out that Syle was the person responsible for the purchase of SHA1865 (ex-SHA1883b), the Knauff organ at the Church of Our Savior in Hongkou, Shanghai, and no doubt the Philadelphia builder was chosen because of Syle’s American connections.

Syle was very musical, and confronted the problems missionaries invariably had in deciding on the best approach to inculturating Western religious music in a non-Western context. The is not space here to describe this in detail, so I will let him do it himself (Eurocentric values typical of the nineteenth century and all) in a letter written at exactly the same time that Ravary and Deleuze were building SHA1857. It is not too much of a leap of imagination to think that Syle was one of the many visitors to Zikawei in 1856/57, who went out from Shanghai just to see the bamboo organ destined for Dongjiadu under construction.

“The Bishop has devolved on me temporarily the office of organist [at the Church of Our Savior, Hongkou] on Sunday mornings, and, as a consequence, instructing the scholars and our poor communicants to chant the few canticles which have been prepared for our chapel service has occupied me a good deal of late. They take to it with tolerable readiness, but are prone to imitate the drawling manner [sliding between tones] of cantillation that prevails among the Buddhists.

“This whole subject of music as connected with Chinese hymnology is one that has begun to exercise the minds of several among the missionaries both here and at the other posts; and by the same token it may be known, that there are a few renewed souls at every station who are asking to be taught some suitable manner in which to sing the praises of the God whom they have learned to know and love. Of course, there are three methods of meeting this want: (1st) to write hymns adapted to Chinese tunes, or (2d) to teach our own tunes, or (3d) to find out some musical tertium quid — a modification of either, or a combination of both methods.

“As far as my own attempts have gone in pursuing the first method, I have not succeeded in finding any Chinese music which, either in itself or its associations, could be profitably used in the worship. I have found one or two strains, in Chinese war songs and Buddhist hymns, which would furnish the groundwork. It chants somewhat in the Gregorian manner, and I have adopted a very peculiar air to words conveying moral instruction, such as school children might learn with interest (as indeed they do); but I have not met, nor do I expect to meet, with anything that will come up to the requirement of Christian psalmody. The whole style, conception, and manner of the Chinese music is artificial, strained, and ineffective; the notation imperfect, and the whole subject of harmony ignored.

“The second method, that of teaching and using our tunes, has been tried in many places, and with most success. As to notation, some have attempted, by reversing the order – that is, reading from right to left –to make the use of our staff and our musical notes easier of acquisition, while others have taught our music just as it stands; for which method there are so many good reasons, that I have settled down upon it myself, after having made trial of every other reasonable plan I could hear of or could invent. I have taught with the five-line staff, and with a three-line staff, and with no staff at all, but using equal squares for the beats of a measure, and numbers, to indicate the intervals [pitches?] of the scale.[1] This lost plan is not without its advantages, but the drawbacks are the same as those connected with the employment of a new alphabet, which, though it may be more perfect and more philosophical than the one discarded, cuts off the learner from every access to all that the wisdom of past ages has lodged in that older form.

“My conclusion is, therefore, that to teach our music just as we have it is the best thing for us to do; leaving it for the future Christian poets and musicians of China to work out, if desirable, that tertium quid before referred to. At present we are cultivating chanting almost exclusively; the Venite, Gloria Patri, and Gloria in Excelsis may be heard at our chapel service in a manner which would remind a stranger of the Christendom from which he is so far distant…”

For much more on Syle, the impressive work of Australian scholar Ian Welch should be consulted: https://openresearch-repository.anu.edu.au/handle/1885/11074?mode=full

[1] i.e., somewhat similar to present-day jianpu notation. This numerical system had, however, just been invented in Paris about 1844 (based on earlier numerical systems, including one by J.J. Rousseau) by Émile-Joseph-Maurice Chevé (1804 –1864). It is possible that Syle learned of the Chevé system from the French Jesuits in Shanghai.