The Project does not actively deal with the questions of repertoire or performers in the history of the pipe organ in China, except where these things have some important bearing on the history of instruments themselves. One of the organists mentioned in Keys to the Kingdom, in connection with the Gray and Davison (SHA1856) and Walker organs (SHA1863b, and SHA1883a) in Shanghai was G.B. Fentum, and his name and excerpts from his letters have appeared in publications by the Project going all the way back to Prof. Urrows’ original articles in TAO in 1993.

Recently, we heard from Mr. Keith Robinson in the UK, who is writing what promises to be an interesting book on Sir Robert Hart (1835-1911, long-time inspector general of the China Imperial Maritime Customs) and his musical activities. Hart knew Fentum, and some biographical information on Fentum prepared by Deirdre Wildy (Head of Special Collections & Archives, The McClay Library, Queen’s University Belfast) was passed on to us as well. We are grateful to Mr. Robinson and Ms. Wildy for their help in learning more about Fentum, to which Prof. Urrows has here added his own findings. (Some further information on Fentum in Singapore has been found in the e-book, The Singaporean Soundscape: Musical Renaissance of a Global City, ed. Jun Zubillaga-Pow and Ho Chee Kong (2014), available here: https://www.scribd.com/document/242878621/The-Singaporean-Soundscape .)

Fentum was born George Benjamin Fentum in St. Helier, Jersey, Channel Islands. His father, also named George, was a ‘professor of music’ (meaning simply a music teacher.) His family appears to have been widely involved in music, and the manufacture of musical instruments: a John Fentum (fl. 1774- ca. 1835) was a violinist and music publisher and seller in London, with a shop in the Strand established by his father, Jonathan Fentum. In Keys to the Kingdom (pp. 190-191) G.B. Fentum is discussed in connection with the Walker organ in Shanghai’s Holy Trinity Cathedral (SHA1883a), a major installation that replaced an earlier organ by Gray and Davison (SHA1856), which was in turn moved and reinstalled in the Masonic Hall on the Bund (built in 1867).

Ms. Wildy’s research confirms (as also noted in FN 423) that Fentum first moved from the UK to Singapore in the about 1865.  It is reasonable to surmise that he was opening a branch of business for his father or other relatives, as we know that he was importing and selling pianos, instruments, and sheet music. He was also organist of St. Andrew’s Cathedral (1865-72), and director of the Singapore Amateur Music Society. Ms. Wildy reports that he did not like the climate and fell ill, and moved to Shanghai in 1872.  His departure may also have been due to his failure to successfully set up a music school there, with a Dutch or Flemish colleague named I.C.H. Iburg. Ms Wildy has found press references to Fentum in Shanghai starting around 1875: accompanying a performance of Cox and Box in 1876; playing piano in a chamber music concert (including a Beethoven piano trio) in 1878; and accompanying what must have a very early if not the first performance of Handel’s Judas Maccabaeus (date not given, but before mid-1886) in China. As noted in Keys to the Kingdom, Fentum, like most of the organists at Holy Trinity Cathedral, was a Mason, and ‘District Grand Organist of the Grand Lodge of Northern China E.C.’ between 1878 and 1886 (see photo).

Ms. Wildy mentions finding a reference from 1878 about the push to replace Holy Trinity’s failing SHA1856 at Fentum’s instigation. Mr. Robinson has established a connection with Hart through a recital Fentum gave at Holy Trinity on 28 May 1886,  the eve of his departure for Australia, where he spent the rest of his life. This recital included works by Lemmens, Gounod, Mendelssohn, Guilmant, Bach Beethoven, and Batiste. The previous month he had given a farewell recital at the Masonic Hall, with works by Beethoven (Piano Trio in C Minor, Op. 1 no.3, with a Mr. Ibert, violin (could this have been Iburg?), and a Mr. MacDonald, cello), Charles de Bériot (Violin Concerto No. 9 in A minor, Op. 104), and a piano concerto by Mendelssohn. In Australia “he was responsible for having many organs built there”, according to Ms. Wildy, although we do not have any details about just what installations these might have been. In Keys to the Kingdom, Prof. Urrows noted that Fentum played the Mendelssohn D Minor concerto in Singapore in 1899, and accompanied Elijah at the Town Hall in Melbourne in 1902. Ms. Wildy adds that he was director of music at the Presbyterian Women’s College in Sydney. He died in 1914.

More research should be conducted on musicians like Fentum, who were active in the ASPAC region between the start of the Treaty Port era (ca. 1840) and the end of the First World War. Much could be learned about the musical lives of the time, of the integration and development of audiences and practioners of Western music in Asian environments in the nineteenth century, and about just how these cultural transfers partly led to the saturation and, to some extent, lasting hegemony of Western concert music in Asia. This saturation has long displaced (or at least ‘relegated’, as they say in sports) traditional musics in the urban public eye (and ear), an anomaly that highlights its apparently unshakeable place in modern, developed Asian cultures. Also significant is the fact that Fentum appears to have been one of the only organists in China ever to make his living entirely as a professional musician, and not an amateur organist with a ‘day job’. 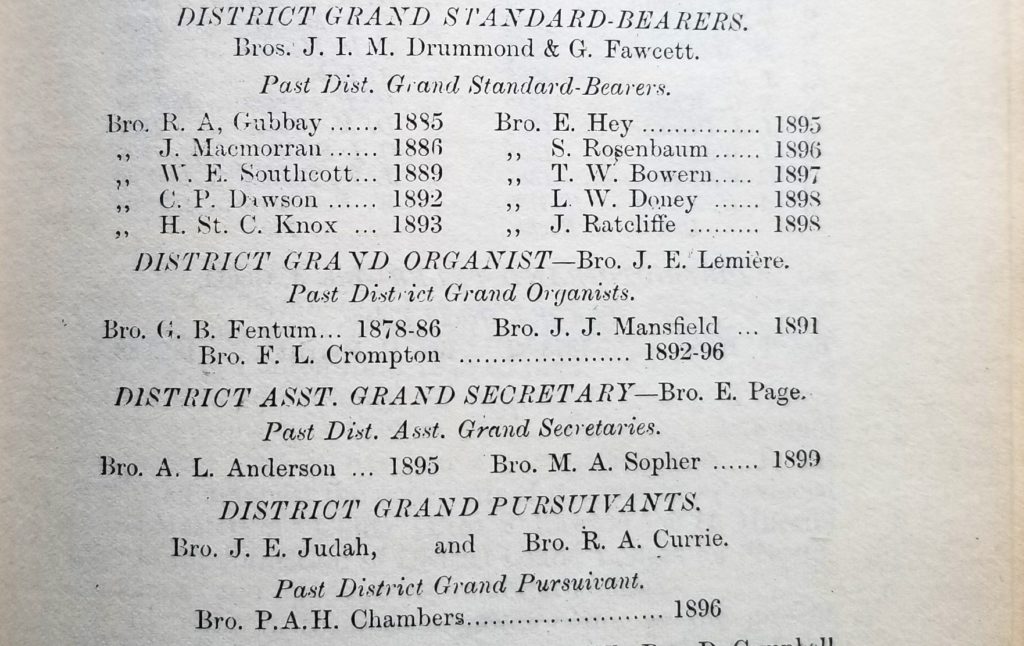 From: F.M. Gratton. Freemasonry in Shanghai and Northern China. Second ed. (Shanghai: Office of the North-China Herald, 1900). Fentum is listed as Masonic organist, 1878-1886. F.L. Crompton, who succeeded to the post in 1892, was also titular organist of Holy Trinity Cathedral.