Walker No. 1158 was the largest pipe organ yet erected in China at the time of its installation in 1883. Several builders had been approached for the contract, including William Hill and Sons; but the contract was eventually awarded to Walker in 1881. Prior to being sent out to China, two recitals were played on the organ in London, one by Sir Frederick Bridge (1844-1924), organist of Westminster Abbey, and the other by Dr. F.E. Gladstone (1845-1928.) The organ was housed in a free-standing case (see main picture) and was hand-blown.

The earlier Gray and Davison organ (SHA1856) in Holy Trinity Cathedral had long required replacing, and was overhauled by Walker in 1883 and reinstalled in the Masonic Hall, possibly utilizing some pipes from SHA1863b.  All this activity was due to the industry of the organist of Holy Trinity from 1878 to 1886, George Benjamin Fentum (1843-1914). For more information about Fentum, see the post on What’s New for 13 May 2020.

When erected, SHA1883a had the following specs:

The climactic problems that affected the Gray and Davison organ (SHA1856) had not, however, been solved by the builder. It was overhauled and cleaned in 1889 and 1897. In 1904 it was slightly enlarged: the Great 16′ Double Diapason was replaced by a Bourdon 16′, and the Twelfth was replaced by a 4′ Clarion. In the Pedal division, the Quint was removed, and a 16′ Trombone and an 8′ Flute added. The Trombone was later said to be of the “German type, and most unsatisfactory.” There was a final overhaul in 1908, when the straight pedal board was replaced by a concave one.

SHA1883a was in use until after the First World War (when it was replaced by SHA1925.) At this time it was sold to the Jesuits (who had bought it for 3,500 taels) and, rebuilt by Harrison and Harrison, it was re-installed in the Cathedral of St. Ignatius at Zikawei, completed in 1910 (see photos below.)

In the Census (Appendix) to Keys to the Kingdom, this organ is listed as a 35-stop instrument, but this is an error. The stop list is correctly given in the text. 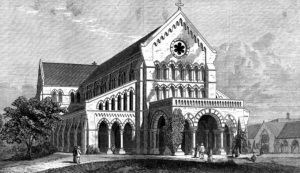 Holy Trinity Cathedral, shortly after its initial erection (the bell tower was not added until 1903.) 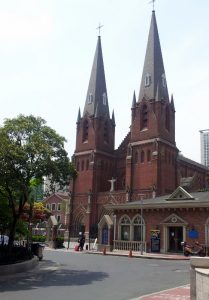 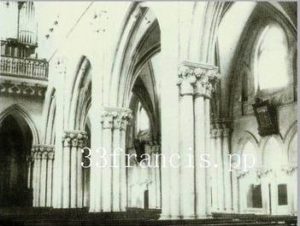 Zikawei in the late 1920s or 1930s. A small part of SHA1883a in its new location can be seen at upper right. (The picture was posted by a Fr. Francis Huang to a now non-functional website of old Shanghai church pictures.) 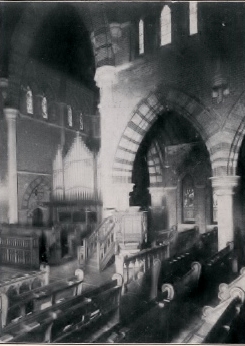