The Phantom of the Organ Loft, Part Two: HKG1896 and its dedicatory recital.

Because in-depth accounts of organ inaugurations in China are fairly uncommon, it’s worth presenting the Hong Kong Daily Press report (29 August 1896) of the first hearing of Bianchetti and Facchetti’s HKG1896 in full. I have worked on identifying the people mentioned here, especially for the benefit of those who do not live in Hong Kong or have any historical knowledge of people and corporations in the former British Crown Colony (1842-1997).

James Orange (1856-1927) was an architect/engineer, and after working for the Hong Kong Brick and Cement Co., he was a partner in the Hong Kong architectural firm Leigh & Orange, founded 1874 and still in business. The firm built many famous buildings and waterworks in Hong Kong.

George Grimble (1867-1933) was born in Hong Kong and worked in what we now call ‘logistics’. Like James Orange, he had a ‘day job’. As reported here, he was a student of organist Frederick (F.A.) Sangster (?-1902), who was the first titular organist of St. John’s (Anglican) Cathedral in Hong Kong. Sangster in turn was a student of Sir Frederick Gore Ouseley (1825-89), who wrote the famous anthem, “From the rising of the sun”, and who had recommended Sangster for the Hong Kong position. Grimble was organist at Union Church, which I think is how Sig. Facchhetti came to be asked to do repair work on the Bryceson organ (HKG1860) in that church. He also is reported playing at St. Peter’s West Point (to be the topic of an upcoming post), and was a Mason as well, and the local lodge’s ‘grand organist’. This raises the interesting question as to whether the Masons in Hong Kong had a pipe organ.

Fr. Angelo Cattaneo (1844-1910) was a PIME missionary who had worked in Mainland China before being called to Hong Kong in the 1880s as procurator of the Diocese. He was later (1905) made a Bishop and Vicar Apostolic of Southern Henan (based in Hankou, part of present-day Wuhan, where the COVID epidemic started!)

‘O. Baptista’ was Oscar Crispim Baptista (1861-1929), a Macanese musician who worked for the trading house of Gibb, Livingston, & Co. He was organist at the Cathedral from its opening in 1888 well into the 20th C. (see pic below). After his death, his talented daughter Aurea took over as cathedral organist.

Lane Crawford Ltd. is a department store in Hong Kong, founded in 1850 and still in business today. G.L. Duncan was an employee in a middle management position in the 1890s. Since Lane Crawford handled furniture sales, he probably had some knowledge of cabinetry and carpentry.

Of the six singers, two were obviously Portuguese: but Carvalho and Graça are very common names, difficult to identify. The Portuguese ‘Club Lusitano’ had held fund-raisers for the organ starting in 1889. The Club is still active in Hong Kong, and The Project plans to ask if they have any records from this period, despite a lot of things such as paper records having been destroyed in 1941-44, during the Japanese Occupation of the colony. Of the two Dutch singers, A.C. Van Nierop worked at some point for the brokerage firm Benjamin, Kelly, and Potts in Shanghai before moving to Hong Kong. Kraal may actually have been born in Macau to Dutch parents, but this is still uncertain (I have unearthed a Lavinia Eulalia Krall, born in Macau 14 March 1853, which is about the right date for a sister of the singer.) I have not uncovered anything about Mr. Sliman who was probably Scottish, though Sliman is derived from a Dutch name. All these people may just have been members of the cathedral’s choir. Mrs. Hagen’s name turns up in numerous concert reviews in Hong Kong newspapers of this time. She was married to an Edward James Hagen, who was a partner in Stolterfoht and Hagen, “agents and commission brokers”. He died shortly after this concert, on 26 February 1897, and is buried in the Colonial Cemetery. His widow continued as a singer in Hong Kong, especially in performances at St. John’s Cathedral.

Finally, the reviewer seems to have got some things wrong. The organ was a two-manual instrument, and his complaints seem to be oblivious to an obvious hypothesis: that only the Great manual of the organ had been installed at this date. The organ, according to research in Italy, was built in 1895, so it could not have arrived in 1894. It probably came in early 1896, and sat unerected while the Lane Crawford crew tried to figure out what to do with it. A sentence in the review was transposed by the typesetter, and I have silently fixed this error here. The reviewer was also unaware of the existence of traditional Portuguese guitar/mandolin ensembles (which he calls here an “orchestra”), and these are still to be found today, even in Macau. The music of James Orange, and Fr. Cattaneo, seems to have disappeared at the present date, but it is surprising to see several recently-composed works on the program as well.

On Thursday evening [27 August 1896] an organ recital was given at the Roman Catholic Cathedral to celebrate the opening of the new organ. The cathedral was crowded and the general opinion was that the recital was a great success. The organ is a low-priced single manual and it was made in Italy. It has, considering the comparatively small sum of money spent upon it, and exceedingly good tone, and a bargain was certainly struck when the purchase was made. The instrument was sent to the colony over two years ago and with it came complete plans of each stage of organ building, which were sent to Messrs. Lane, Crawford & Co. Mr. [G.L.] Duncan was deputed to erect the organ, but unfortunately, he was unable to finish the work because many of the pipes were broken and twisted in transport. It was therefore decided to send to Italy for a special man, and Mr. Vittorio Facchetti, of Brescia, came here to complete the erection of the instrument. He had many difficulties to overcome in the work, and it says much for his ability that the organ now possesses such a good tone; in fact, his work has been so much admired that he was appointed to repair the organ at the Union Church [HKG1860].

The recital opened with a Grand March Offertoire in F which, was composed by Mr. [James] Orange and arranged for the organ by Mr. [F.A.] Sangster, the late organist at St. John’s Cathedral. The piece was played by Mr. G[eorge] Grimble, who is to be congratulated upon his excellent performance, more especially as the music was arranged for an organ with two manuals. The remark concerning Mr. Grimble’s difficulty in playing on a single manual applies of course to Mr. Cattaneo [PIME] as well. Every one praised Mr. [Angelo] Cattaneo’s playing; indeed, he really astonished most of his friends, who were not aware that he was such an accomplished organist. It was indeed a first-class performance that Mr. Cattaneo gave, particularly in the Monastic Coro, in which the flute stop was splendid. Mr. O. Baptista, the organist at the cathedral, also presided at the instrument and gave satisfaction.

The vocal selections were, for the most part, well rendered. Miss Carvalho sang exquisitely, and Mr. C.H. Graça was also in good voice, but the accompaniment was too soft. Mr. Sliman was evidently suffering from a cold and should not have sung. Mrs. Hagen gave Mascagni’s Ave Maria in excellent style, and the duet singing of Messrs. Van Nierop and Kraal was much enjoyed. A number of amateurs gave two selections on mandolins and guitars. They played well, but it would have been better if chorus singing had been substituted. It should be added that the cathedral possesses exceptionally good acoustic properties, perhaps the best in the colony; and the organ well-filled the building, while the vocalists could be heard very distinctly. We must congratulate our Roman Catholic friends on the possession of such a beautifully-toned instrument. We can only say one thing against it, and that is, it is a pity it does not possess fewer stops and a double [second] manual. The following was the programme:

Barcarolle – for orchestra of mandolins and guitars: Lady and Gentlemen Amateurs

Monastic Coro, in distance; and Duet for Flute and Clarionet, [arr.?] for organ, by Maestro A. Cattaeno

Serenade – for orchestra of mandolins and guitars, by [Charles] Acton: Lady and Gentlemen Amateurs

Qui tollis, and Qui Sedet, for Bass [solo]; Laudamus te for Tenor [solo]; Christe [eleison], duet for Tenor and Bass, from Mass No. 8 by A. Cattaneo: Messrs. Van Nierop and Kraal, accompanist Maestro A. Cattaeno

Solo for Tromba [and organ?], and Marcia Finale, for organ, by Maestro A. Cattaneo 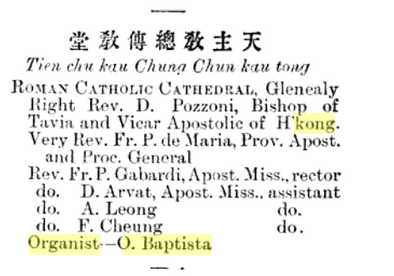 1908 entry for the Cathedral of the Immaculate Conception, Hong Kong, in the “Directory & Chronicle for China &c.”