All sources are liable to lead us into error at times. People who know me, know what a profound influence the ideas and writings of the 20th C. Anglo-Austrian philosopher, Karl Popper (1902-94) have been in my life. Here, The Project has to turn to Popper to explain the removal of one organ from the Census (although it will continue to have a ‘phantom’ presence, because it is described at length in Keys to the Kingdom), and the addition of a newly-documented instrument that effectively and physically takes its place.

The error involves HKG1888, the G.W. Trice organ which we have placed for 30 years at the Cathedral of the Immaculate Conception in Hong Kong. The source which led us into this error, is a history of the Trice organ company of Genoa, La Fabbrica d’Organi di William George Trice, 1881-1897, by Maurizio Tarrini (Savona: Editrice Liguria, 1993). From this book, comes the information that Trice (1848-1920) prepared, and then revised a proposal for an organ for the new Roman Catholic Cathedral in Hong Kong in 1882 (although the Cathedral was not opened for another six years), at a cost of 22,000 francs. In the end, it now appears to have proven to be too much money for the Apostolic Prefecture of Hong Kong to raise (Hong Kong did not become a diocese until 1946). In any event, the procurement of the organ was from the start a competitive tender exercise, under the direction of Fr. Bernardo Viganò (1837-1901). Trice’s progetto, then, was only one of the bids received; and even after the Cathedral was opened, on 8 December 1888, there was to be no organ (except, perhaps, for a harmonium) for another eight years.

Late last month, in going through the Hong Kong newspaper, Hong Kong Daily Press, for 29 August 1896, I came across an account of the dedication of the organ that was finally—only in 1896—installed in the Cathedral. I will give an annotated version of this news article in Part Two. On looking into this further, I found that almost contemporaneous with my own inquiries at the Diocesan Archives in Hong Kong about six years ago, a group of several organ historians in Brescia, Italy, had also made inquiries and had come up with data which for some reason I never saw. This is what actually happened:

The organ for the Roman Catholic Cathedral in Hong Kong, then, was in fact built by the firm of Bianchetti e Facchetti, of Brescia. It was a two-manual and pedal instrument with 55 stops, and thus the largest organ installed anywhere in China until HKG1989, nearly a century later, and the largest instrument Bianchetti e Facchetti ever built. It was later rebuilt by Blackett and Howden about 1921, when and additional manual and five stops were added, bringing the total to 60/III. The organ, according to the 1896 news report, was shipped to Hong Kong in 1894 (this may be a mistake; it appears they began building it in 1895, and in fact it arrived sometime in early 1896). On opening the packing cases, it was found that most of the pipes and the rest of the organ had been damaged in transit. Local attempts to erect the organ failed as a result, and Vittorio Facchetti (1859-1931) himself had to come to Hong Kong in mid-1896 to repair the damage and finally erect the organ. It was tested and approved by George Grimble (1867-1933, organist at the interdenominational Union Church on Kennedy Road), Fr. Angelo Cattaneo (1844-1910, procurator of the Prefecture, and an experienced organist and composer), and Oscar Baptista (1861-1929), a Macanese who worked for Gibb, Livingston, & Co., and who had been organist at the cathedral since its opening in 1888. In a 1908 Elenco of his recent installations (see below), Facchetti proudly mentioned that HKG1896 had been “eseguito da me in persona sul luogo” – ‘installed by me personally on the spot.’ Facchetti and Grimble seem to have got on well, and Facchetti was then asked and made some repairs to the organ at Union Church (HKG1860) at this time.

For the dedicatory concert on 27 August 1896 (see Part Two), it appears that about half the mechanical action organ was ready, with the Grand’ Organo (Great) and Pedal divisions in place, and the Organo espressivo (Swell) installed at a later time, probably by early 1897. We may hypothesize that Facchetti had to send back to Italy for additional parts and pipes, all of which greatly delayed the work. The full specs are now available at HKG1896 (a date I have chosen for ‘first report’, and certainly this was the date of the dedication of the instrument, no matter that it may not have been fully erected at this point.)

The discovery of this instrument means that certain assumptions about the succeeding instrument by Blackett and Howden (HKG1921) have to be reconsidered; and that the organ case now standing in the Cathedral is unlikely to be the original Bianchetti e Facchetti case. It has ducts for pneumatic tubes, and doesn’t look anything like the surviving organs from the Italian builders. It was probably built by Blackett and Howden, perhaps even in Hong Kong from locally-sourced woods. This is a new point of inquiry for The Project.

In Part Two, I will present the 1896 review of the dedicatory concert with annotations (the journalist doesn’t seem to have got all his facts right.)

The Project is most grateful to Sig. Massimiliano of Organibresciani.it for his help with documenting this research and this organ, and whom we thank for the images below. 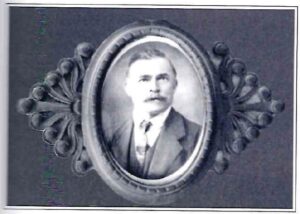 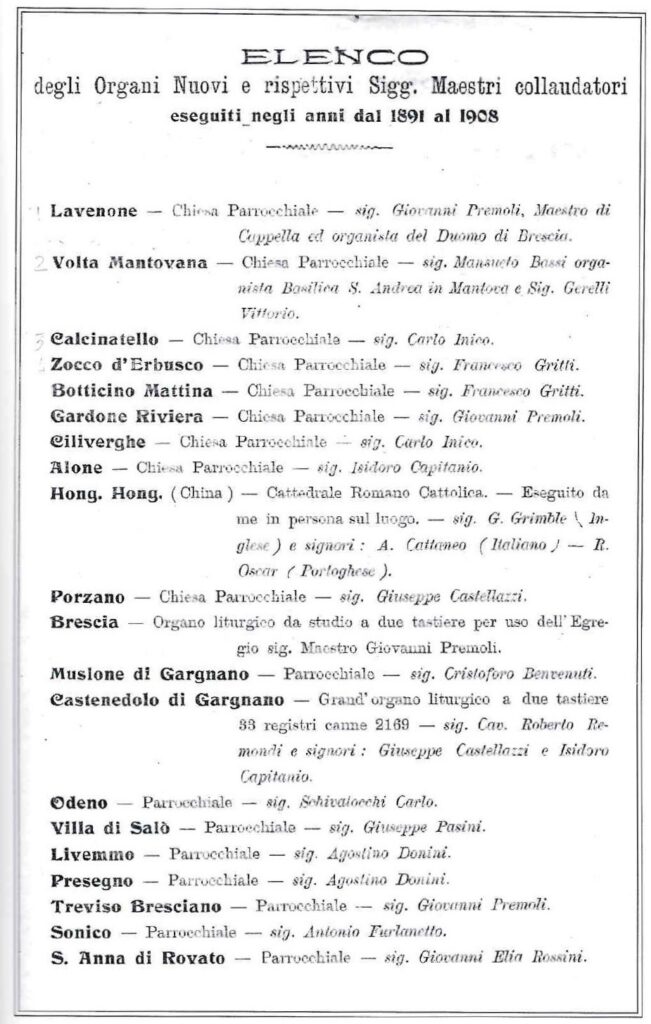