The Pipe Organ in China Project Website: Updates for May 2022

The webmaster for The Project has begun upgrading various aspects of The Pipe Organ in China Project website. Visitors and users will find it much faster to use, now that the WordPress software has been upgraded to a newer version than that used in the original set-up four years ago. There are still some things in progress, and further improvements will be introduced this summer.

The page for HKG1980 has been provisionally updated, with (part of) the strange story of its unlucky journey into a dismantled state, obscurity, and desuetude. The Project is presently considering how to assist in putting this instrument back together, and back into use. It is one of only five practice pipe organs in Hong Kong known to us. We hope to be able to finally give the specs and further details in next month’s update.

Photo of the Month: a September 1918 clipping from the British journal, Musical Opinion, relating to the first rebuilding of HKG1887 by William Charlton Blackett (of Blackett & Howden) in 1917-18. (For Blackett’s later complete overhaul, expansion, and electrification of this organ, see HKG1927a).

The works chosen for Denman Fuller’s late-evening dedicatory recital are quite intriguing. While the Choral Song and Fugue by Samuel Sebastian Wesley (1810-76) is a well-known piece, and British organist Henry Smart (1813-79) is still remembered for his numerous hymn tunes, especially Regent Square, two of the other composers and their works are very obscure today. Edward Horsman (Jr., 1873-1918) was an American organist from New York, and the son of the inventor of the famous ‘Horsman’s ‘Eclipse’ Camera’. He was the composer of the once-popular art song, “The Bird of the Wilderness”, written in 1914, to words by Rabindranath Tagore, and dedicated to the opera singer, Alma Gluck (it can still be heard on YouTube.) Arthur Barclay (-Jones, 1869-1943), was a London-based composer and conductor. Perhaps the Elgar piece (‘Military March’) was a transcription of the first of the five Pomp and Circumstance marches.

William Gould Bennett Denman Fuller (1880-1925) was Cathedral organist at St. John’s, Hong Kong during the years 1905-1923. He also composed the official anthem of Hong Kong University, for the opening of the University’s main building in 1912. But his Out of the Past seems to have disappeared…into the past.

Interesting as well from today’s tragic standpoint, is the announcement below the Hong Kong notice of a recital at St. Mary Redcliffe, Bristol, by John Pullein FRCO (1878-1948), a noted British organist and the eldest for four brothers, the other three of whom were also organists. The “Kieff Processional” was probably an organ transcription of “The Gate of Heroes at Kiev” (often mistranslated as ‘The Great Gate of Kiev’) from Pictures at an Exhibition by Mussorgsky. 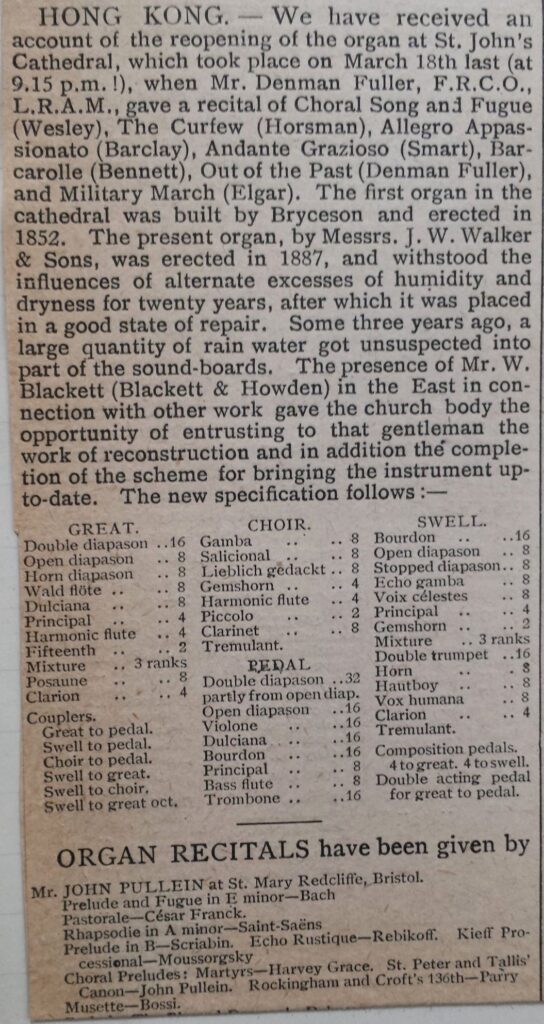