A large three-manual Walker installed in St. John’s Cathedral in 1887 (pic courtesy of Thomas Li.) When word of Walker’s SHA1883a arrived in Hong Kong,  the Cathedral promptly ordered its own new organ at a cost of approximately 2,000 GBP. Doubtless the builder was told that above all it had to be larger, at least slightly, than the 32-stop Shanghai instrument, but in most respects it was a ‘twin’. By three stops, HKG1887 was for a while the ‘largest’ organ in China.

The new Walker was installed and opened on 21 June 1887, at a service that marked the 50th anniversary of the accession of Queen Victoria. The old Bryceson organ (HKG1860) had to be got rid of, and this seems to have caused some dispute at St. John’s: “Considerable discussion took place as to the disposal of the old organ: a suggestion to “raffle it” was not received with approval. Eventually, it was sold to the Union Church.” (However, Walker kept and reused the Bryceson swell box, and so the organ as re-erected in Union Church after 1890 was probably initially somewhat smaller than it had originally been.)

In 1905 the organ was overhauled by the Cathedral organist, William Gould Bennett Denman Fuller (F.R.C.O., L.R.A.M.) Denman Fuller himself oversaw the works “and many original and ingenious devices were introduced by him to check the ravages of both the climate and white ants.” By 1911, Denman Fuller had added a 16′ Double Trumpet to the Swell, and a 16′ metal Open Diapason to the Pedal, and added 12 pipes to a pedal Violone that had been added at an uncertain date.

In July 1915 the bellows were renewed, but shortly after this water got into parts of the soundboards, and  around 1917 William Charlton Blackett (of Blackett and Howden) was brought in “to seek his advice and assistance in effecting further repairs…In addition to repairs and replacements, some new stops were added.” The new stops were: GT: Double Diapason 16′ (taken from the Swell, swapped for the Bourdon 16′); CH: Harmonic Flute 4′ (presumably this replaced and used part of the Lieblich Flöte 8′), Piccolo 2′ (taken from the existing 4′ Flute); Ped: Double Diapason 32′ (partly borrowed from the Open Diapason 16′), Violone 16′ (added in part as noted at an earlier date), Dulciana 16′, Principal 8′ (as with SHA1883a, the pipes of the Quint 12′ were reused for this), and Bass Flute 8′. “Other stops were revoiced and the choir organ enclosed in a swell box.”

Finally in the spring of 1918 the work was finished and a rotary electric blower built by Blackett was installed, a gift of Denman Fuller himself. Fuller’s dedicatory recital on the rebuilt HKG1883, on 18 March 1918. In 1920, Blackett added one of his firm’s trademarks, a Diaphonic Tuba 32′, to the Ped.

In the winter of 1924/25, the Church Council had to choose between another minor renovation to keep the organ going for a few more years, or a complete rebuilding. They chose the latter at a cost of 14,000 Hong Kong dollars, and appointed Blackett again to do this work. This resulted in what was essentially a new organ utilizing the old Walker pipework, for which see HKG1927a.

Establishing the original stoplist in difficult. In the Census (Appendix) to Keys to the Kingdom this is given as a 37-stop organ. This includes the 1911 additions. Chart 4.7 (p. 192) shows 34 stops. It is unclear when the Pedal Principal 8′ was added. It appears in an early stoplist, but there is also documentation that says (as noted above) that Blackett used the pipes from the Quint for this in the 1918 rebuild. In any event, Principal 8′ should be added to the Pedal in the chart. 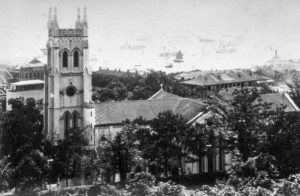 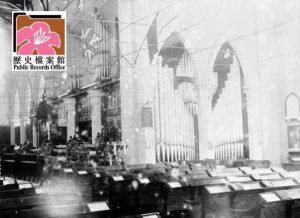 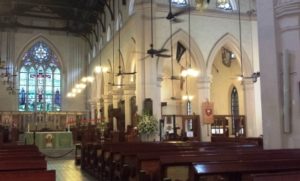 The same view in 2014, showing how the organ chamber has been converted into a chapel. 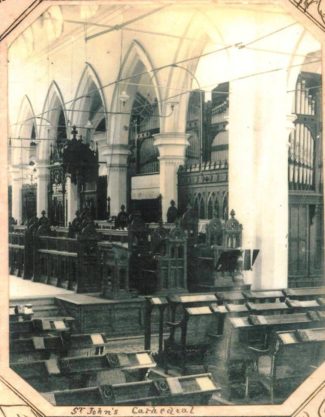