HKG1927a was a major rebuilding of the 1887 Walker organ (HKG1887) that had seen numerous small-scale expansions and renovations over a period of forty years. In the winter of 1924/25, the Church Council had to choose between another minor renovation to keep the organ going for a few more years, or a complete rebuilding. They chose the latter at a cost of 14,000 HKD, and appointed William Charlton Blackett again to do this work (he had worked on the organ in 1917-18.)

On looking into the matter, it was found that during the winter

…the organ completely broke down during a spell of dry weather [winters in Hong Kong are cool and dry], and an extensive examination revealed the fact that the instrument had reached the stage where further “patching” was impossible. Soundboards, reservoirs and wind-trunks were in a deplorable condition. Mr. Blackett was asked to draw up a scheme for the complete rebuilding of the instrument. This scheme included: new console, pedals and accessories; new wind trunks throughout; new pneumatic soundboards to great, swell, choir and pedal organs; six new reservoirs; new drawstop action. (Musical Opinion, June 1927.)

Blackett started his work in February 1925 (he had established his own firm in Hong Kong about 1924, and many of the supplies undoubtedly came from Blackett and Howden in Newcastle.) The new teak case design brought the organ forward to create a series of impressive flats along the right side of the Chancel, as well as along the west side of the organ chamber, where it formed a backdrop above the screen of the side chapel in the south transept. Although it reused pipework from the 1887 Walker, it was in every sense a new instrument, especially with the conversion to tubular pneumatic action. (An examination of Blackett’s surviving instruments shows that his own wooden pipes were made in Hong Kong of various tropical woods, probably sourced from British North Borneo, today Malaysia’s Sabah state.)

Blackett’s magnum opus, the rebuilt organ of 1927 was just slightly smaller than SHA1925, but achieved what Shanghai had set out to do in 1919 – rebuild a 40 year-old Walker – and was done at less expense.

The organ was repaired again in 1935-37 by cathedral organist Lindsay Lafford (1912-2014) and Blackett in conjunction with Moutrie’s Hong Kong office and the Tsang Fook Piano Company, and rededicated in June 1937. The pneumatic action was replaced at this time with Blackett’s locally-made electro-pneumatic action (utilizing a 12-volt generator taken from an automobile, and hand-wound magnets) and the console was moved to the north side of the chancel, visually and acoustically better for the organist. Two years later, in December 1939 it was again reported to be in bad shape. But by then Japanese advances on the Mainland put bringing anyone from England for repairs out of the question.

On 8 December 1941, just as the attack on Pearl Harbor was subsiding,  the Japanese invaded Hong Kong from the Mainland at the Shenzhen River. The cathedral was shelled, and one shell passed through the area in the north side of the cathedral where the organist – had there been one – would have been sitting. The British surrendered the supposedly unconquerable Crown Colony on Christmas Day,

During the Japanese occupation, the cathedral was used as a social club for officers, a meeting hall, and a gymnasium. Walls were erected to divide the building laterally. At the end of the war in 1945 much of the organ had been damaged or gutted, but the façade pipes still remained. It was finally removed in October 1948, and some of the remaining pipes are said to have been given to the Roman Catholic cathedral (see HKG1921.) St. John’s then bought a Compton ‘Electrone’ organ, installed in April 1949 (and shipped, like SHA1925, for free by the Glen Line) and has never had a pipe organ since. The area formerly used as an organ chamber is now utilized as a chapel. 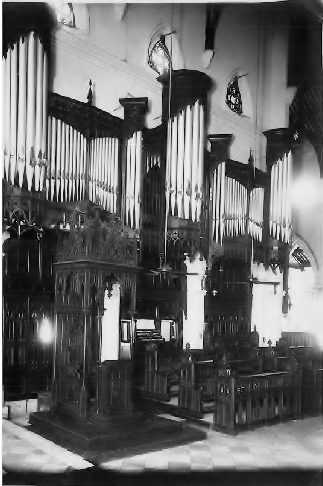 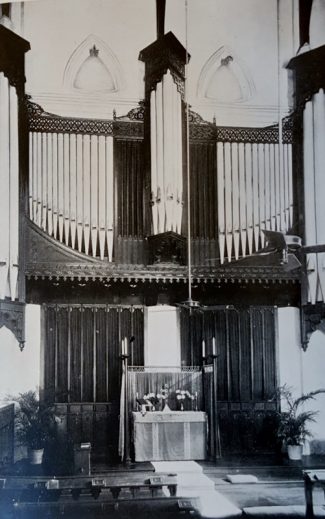