This month there are no updates to the Census of new instruments; but the Project has been excited to learn that a contract has been let for a three-manual and pedal, 32-stop, electric action pipe organ for the Cathedral of St. Ignatius at Zikawei (Xujiahui) in Shanghai. Further details will be forthcoming later in the year about this successor to SHA1883a.

New photos have been added for HKG1927b (taken in 2013, before the repainting of the church’s interior.)

The major activity this month has surrounded WHN1846, and the discovery (noted in the previous What’s New post) that this locally-built organ in a remote location had pipes made of bamboo. As reported, this increases the number of builders/locations of bamboo organs in China to at least 2, and pushes back the starting date of this type of organ by a decade. Through the thoughtfulness of our colleague, Prof. Francesco Maglioccola, it is possible to share some more biographical details about the builder of this instrument, culled from recondite material which Prof. Maglioccola has located in archives and libraries in China and Italy, and which he has kindly shared with the Project.

Father Giovanni Battista Torre da Omegna (嚴懷義)was born in 1808 at Cusio in the province of Novara, in the Piedmont region (some sources call this part of Liguria.) The House of Torre was an old noble family, and Giovanni showed an interest in the religious life as a boy. He was ordained a priest in 1831, and his first overseas posting was to Palestine. He spent time as priest and administrator in Bethlehem, Beirut, Tripoli, and Cyprus. He returned to Italy briefly in 1842, and then left for China, his “second homeland.”

Conditions in the vicariate of Huguang (today’s Hubei and Hunan provinces) in 1843, where he was sent shortly after the conclusion of the First Opium War, were not good for missionaries. Nonetheless, it was during his brief five years of service there that he built the bamboo pipe organ for the little church at Tianmen, near Hankow (Hankou; today, part of the megacity of Wuhan).

In 1848, the bishop, Giuseppe Novella da Carpasio (1805-72, whose letters are the source of information about the organ), and a Spanish friar, Fr. Miguel Navarro (1809-77), were expelled from Huguang and exiled to Canton (Guangzhou). Fr. Torre da Omegna was named Vicar general of Wuchang in their places. But after only a few weeks in this role, while bringing the sacraments to a sick parishioner in Wuchang, he was arrested on 30 January 1848, on the orders of the local ‘governor’, ‘Kiam-hia-hiem’[1]. Fr. Torre was maltreated, and starved in prison for three weeks, apparently not so as to kill him but to ‘persuade’ him to leave the area.

Eventually, due to his deteriorating condition, he was sent under the guard of a minor mandarin to Canton. Here, after long negotiation, he was released into the custody of Dr. Peter Parker (1804-88), a renowned physician, Protestant missionary, and eventual diplomat. But he was past the medical help of the time, and there was nothing to be done. He died on 15 April of his injuries. Some sources say he died in Hong Kong, but the eyewitness account by Monsignor Novella says he died in Parker’s house in Hog Lane, Shamian, Canton, which doubled as his hospital. Parker arranged for a steam launch to take his body to Hong Kong, where, to the dismay of his Roman Catholic confrères, an autopsy was performed. The conclusion was that he had died of an inflammation of the brain. The Franciscans now consider him a martyr.

Father Torre da Omegna was buried in a small Catholic cemetery, “eastwards of Cantonment Hill” (today’s Hong Kong Park) and outside the British residential settlement (British Hong Kong was only founded in 1841-42, and was still quite small at this date.) The location of his original grave is lost; but it was somewhere south of Queen’s Road East in present day Wanchai, on the hill that is now is crossed by Sun, Moon, and Star Streets, appropriate enough for a Franciscan!

A 1926 publication (in Latin) by Fr. Cosma Sartori, printed at Hankow[2], mentions that “This Father Torre was famous in scientific and mechanical arts”, but adds nothing further about the pipe organ.

[1] As given by Msgr. Novella in his letter. Perhaps this ‘Kiam’ was actually the local daotai, as the Governor-General (or Viceroy) of Huguang at this date was one Yu Tai 裕泰 (in office 1839-51). 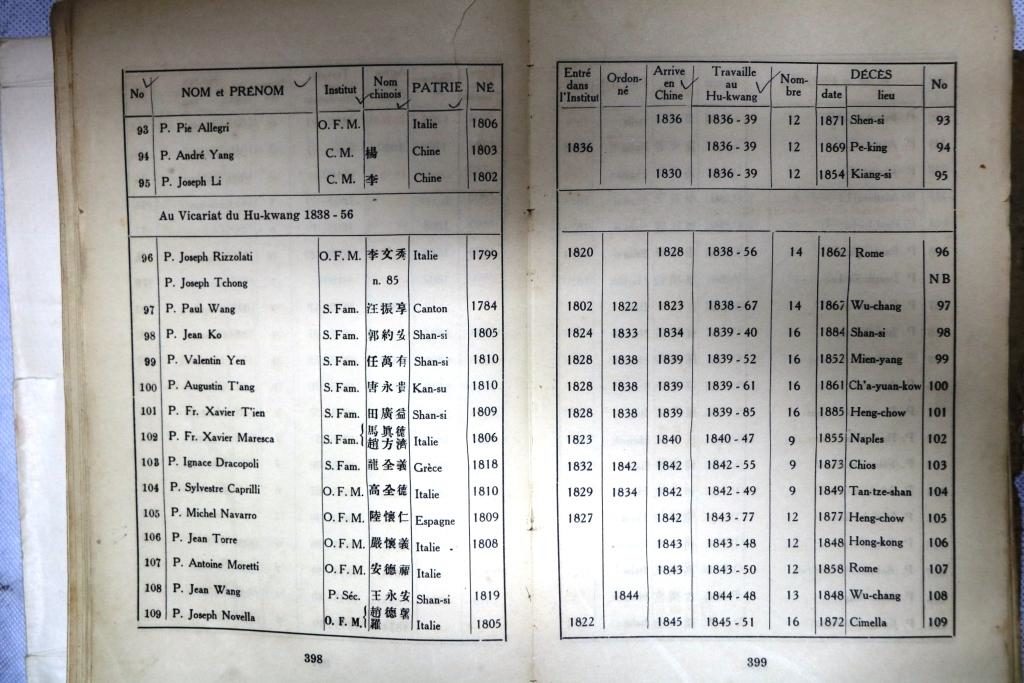