Updates for April 2019: Another Casavant in Beijing, W.C. Blackett, and Fr. Meinardi

In China, ‘leisure’ (康樂, =sports) and ‘culture’ (文化, =art) tend to be linked together at government levels under the same administrative department. Placing a concert hall next to a sixty-year old, 66,000-seat football stadium does not appear incongruous there. The new building will be yet another futuristic (‘xenophilic’) piece of architecture having nothing to do with its surroundings, especially the Soviet-style stadium next door. Details about the design can be found here:

Casavant has not yet released further details, including specs and CAD images. The Project will update on this as information comes in.

Fr. Meinardi appears on p. 123 of Keys to the Kingdom in connection with an automatic box organ he built along with Fr. Giambattista Serafino (1692-1742) in 1741 for the Qianlong emperor. Meinardi reported that the organ’s barrels played “three Chinese sonatas”, but just what these pieces of music were is unknown today. Further information about the new book is available here (in Italian): https://www.comune.druento.to.it/it-it/appuntamenti/il-mondo-di-sigismondo-67934-1-60e934853c612b0ec865731f1eb080fe 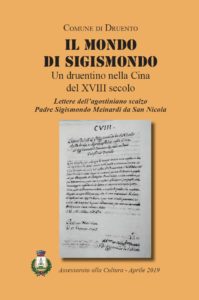