PEK1930 was the final  pipe organ installed in Beijing before 1949, and reflected as did PEK1920 at Peking Union Medical College (PUMC) the resurgence of Protestant missions in the North of China after the Boxer Uprising of 1900.

This II/9 Estey pipe organ was installed in the Peking Union Church, built in 1922 (and expanded in 1928) in a courtyard on the west side of Nanheyan, just south of Donghuamen Dajie. A detailed letter with proposed specifications was sent to Estey in March 1929, describing an enormous four-manual and pedal organ with electro-pneumatic action, and a budget of between 25 and 30,000 USD. The writer, Eric G. Clarke, additionally noted that “there is in Peking an experienced Hungarian Organ Tuner and Repairer [Anton Biszkupits] who, however, is reticent about guaranteeing to be able to erect an Electro-Pneumatic.”

Had it been built, this duplexed, 59-rank, 102-stop installation would have been the largest pipe organ erected in China until the twenty-first century. But political events, let alone the stock market crash, caught up with this grandiose plan. By December 1929, the new head of the organ committee at Peking Union Church (a Dr. Gordon King, of PUMC) had to write to Estey rather sheepishly and acknowledge that “with the removal of the capital to the south [i.e. to Nanjing] the community of Peiping has been considerably reduced in size and the possibility of raising money for a large organ is therefore remote.” In the end they had raised only 3,500 USD and King asked Estey “what can be done for the money we have to spend?”

Estey’s response was to build a II/9 organ (a Model 3-4-2), which was shipped on 13 July 1930 from Charlestown, MA in 16 cases on the President Adams, and arrived in Shanghai at the beginning of September. When the organ turned up in Beijing in early October, it was found that Estey had forgotten to include the instructions for erection. A frantic telegram went to Brattleboro, and the instructions had to be sent by mail and arrived a month later, but it is likely that Biszkupits began work on the montage anyway.

Despite Estey’s assurances that the organ would be trouble-free, two years later there were already problems. The Principal of the Yu Ying Boys School at Dengshikou, Ernest Shaw, took over the organ committee and wrote to Estey in December 1932 to say that the Vox Humana was constantly out of tune, the electric supply (and consequently the wind) was not always constant, and that the variations in temperature seemed to wreak greater havoc in China than in Vermont. Shaw asked who Estey could recommend to look into the matter, adding that “the representative of the British firm of Moutrie & Co. says that he is only a tuner, not a builder, and cannot do it. The Russian [sic., Biszkupits] that installed the organ in now not available.”

As there is no further correspondence from this time in the Estey archives, it appears that Biszkupits returned to Beijing and dealt with the matter. The organ was still functioning and mentioned in newspaper reports as late as 1939-40.

The fate of PEK1930 is a bellwether for the fate of China’s pre-1949 organs. Sometime after 1940, PEK1930 was raided for its metal pipes. A letter to Estey of May 1946 stated that “the entire Open Diapason rank is missing; and so much of the Dulciana is gone (all but nine pipes) that we feel it would be wise to get a whole new rank. Of the Melodia, there seem to be missing only 12 out of the 61 pipes…In the swell box…of the Flute there are only 34 left…The same is true of the Vox Humana, of which there are about 24 present.” Estey had to reply that due to the war, “we have not resumed the manufacture of pipe organs and have no pipe organ parts available for sale at the present time.”

Here the history of this instrument ends, except for a final fragment passed on by Fr. Wang Jizhi in his 1991 article on pipe organs in Beijing (see PEK1925a). He suggested that the organ was rebuilt after the Second World War only to be destroyed again in the Cultural Revolution, and that the Estey console was still in the church when he published his article. It is however doubtful that the organ was repaired after 1946. There was no one in Beijing at the time to do such work, and after 1949 the US State Department routinely denied requests for export licenses for the sort of materiel required to ‘Red’ China (see SHA1934a).

Sometime between 2000 and 2003 the congregation that had taken possession of the church in the 1980s moved to a new building in the south of Beijing. The Project located the old church site, hidden behind a single-story restaurant on Nanheyan Dajie, in 2010; but there was nothing to be seen at that point besides a few of the 1928 outbuildings. By 2012 the site had been rebuilt as an ‘international vocational institute’. 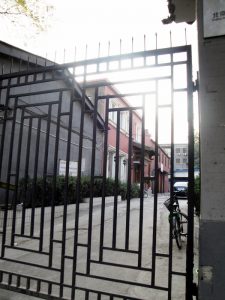 Former Manse (second from left) and other buildings of Peking Union Church, 2010. 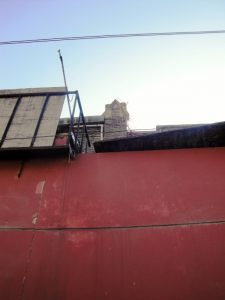