This has been a quiet month at The Pipe Organ in China Project, except that page views up to today have reached 5, 462!

A new three-manual and pedal Rieger organ, FCW2018b, was dedicated in November in Fuzhou. This is located in the new, large Flower Lane (Hua xiang) Church, a ‘megachurch’ with over 20,000 members.

Further data on a photo (from 1916) has been added to FCW1915, and some old confusion over the identification of two different churches in Fuzhou has now been cleared up (including the original ‘Flower Lane Church’.)

While not in China, the Project’s founder had the opportunity to visit Singapore in March, and play on the newly-restored and enlarged 1912 Bevington two-manual organ at the Roman Catholic Cathedral. The work was carried out by Diego Cera Organ Builders, and is a model of what should urgently happen to the similarly derelict, or near-derelict organs in Hong Kong built for Roman Catholic parishes in the 1920s and 30s by William Charlton Blackett. 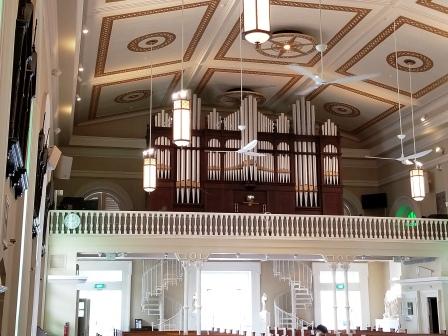