3. The Project is sad to note the passing on 1 August of Prof. R.G. (Gary) Tiedemann (1941-2019), of Shandong University (山东大学), Jinan, PRC, and formerly on staff at the School of Oriental and Asian Studies (SOAS) at the University of London.

Prof. Tiedemann was a giant in the world of China and Christianity studies, and an authority on the Boxer Uprising of 1900. He was a distinguished author, a great personal resource for countless China scholars, and was consulted on many occasions during the writing of Keys to the Kingdom. Without his vast knowledge of many obscure people, places, and events, and his willingness to share his expertise, the historical side of Chapter 4 would be much diminished. He will be greatly missed by everyone connected to The Project. An obituary posted to his website can be found here:

4. New book about Fr. Sigismondo Meinardi: as mentioned in an earlier update, a new edition of the letters of Sigismondo Meinardi OAD has been published in Italy. Fr. Meinardi built an elaborate mechanical box organ during the reign of the Qianlong Emperor, listed in the Census as PEK1741.

The book is described by the publishers as follows:

This is a reset and slightly revised edition of 75 “Turinese letters” in Italian, first printed in a limited edition in 1964 (Sigismondo Meinardi da San Nicola OAD. Epistolario. Parte prima. Lettere originali inviate a Torino. Roma: Edizioni di «Vinculum» – Rivista interna dello Studentato Teologico di Gesù e Maria dei PP. Agostiniani Scalzi, 1964), with some additional essays. These letters were sent to his family and his superiors in Turin by Meinardi (1713-1767, Xi Chengyuan 席澄源), a missionary in Beijing and a clockmaker for the Qianlong emperor. 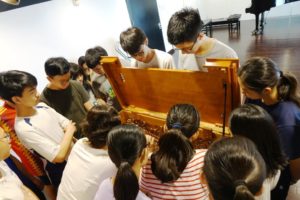 SOA students an up-close look at the inner workings of HKG2014.

The participants in the final recital at the Academy for Performing Arts, on HKG1986.