Some of the best discoveries are made when you are looking for something else. This happened to me at the end of January. I was looking for the publication date of Herbert Westerby’s massive The Complete Organ Recitalist (London: Musical Opinion, 1927, as it happens).

On page 321, in the section “Noted Organs in Other Colonies”, I was struck to see China with three listings: the Harrison and Harrison organ in the “Shanghai Cathedral” (SHA1925); followed by an organ in Hong Kong, identified as located in the “Hong Kong Cathedral”; and then a third organ, the Walker in “Hong Kong, St. John’s Cathedral”. This last is HKG1887, rebuilt by William Charlton Blackett in 1927, a fact which Westerby probably did not know at the time. (see pic below)

What then was the “Hong Kong Cathedral”? This can only be, by default, the Roman Catholic Cathedral of the Immaculate Conception, with its Bianchetti e Fachetti (HKG1896) organ, rebuilt by Blackett in 1917-1921 (HKG1921), while he was still a partner in organbuilding firm Blackett & Howden (as noted by Westerby.)

However, looking at the entry there is an anomaly. The Shanghai Harrison is given the date of 1921, which is clearly wrong (it should be 1925). The Blackett and Howden rebuild of the Facchetti organ is given no date (and should be 1921); and the old Walker in St. John’s is given correctly (1887). I suspect that the 1921 date is supposed to go with the second organ in the list, the Blackett and Howden rebuild, and that the long-delayed 1925 installation of the Harrison in Shanghai, as well as the rebuilding of the old Walker in Hong Kong, were both facts unknown to Westerby when he finalized his book, probably sometime in late 1926.

Now comes the really interesting part: Westerby gives the specs of the Blackett and Howden HKG1921 as 3 manuals and 60 stops! This means that Blackett added an additional manual, five new stops, and redistributed them all over three manuals, in addition to making the organ a pneumatic action instrument and building a new case, soundboards, and really only reusing the 1896 pipe work. It also means that HKG1921 was by number of stops, if not of pipes, the largest pipe organ to be installed in China until the IV/93 Rieger (HKG1989) in the Concert Hall of the Hong Kong Cultural Centre in 1989.

This also means that the entry in the 1921 Dictionary of Organs and Organists, for the “Roman Catholic Cathedral, built by Blackett and Howden. 2 Manuals”, acknowledges the rebuilding, but gives the old original specs for the Bianchetti e Facchetti organ. The database entry for HKG1921 has now been updated to reflect this new data. Blackett went back to work on the instrument in 1937-38, but this appears to have been just a major maintenance overhaul, partly due to insect damage and the consequent rebuilding of the organ loft.

Finally, who was Herbert Westerby? He was born in Huddersfield ca. 1865 (some sources give 1861), and was a distinguished British organist, pianist, and conductor. He studied with E.H. Turpin, Henry Parratt, and James Higgs, and held a Mus. Bac. from the University of London. He was an F.R.C.O., and a Licentiate (L.Mus.) of Trinity College of Music, London (a much more prestigious diploma then than it is today) and a BBC recital organist He composed a few works, including a Te Deum for five voices, and an anthem, God be in my head.  He was organist of various English churches, spent some years in South Africa (at Grahamstown (now Makhanda) and Kimberley), and then returned to the UK, where he was organist at churches in Elgin, Linthorpe, and Kirkcaldy in Scotland, and later in the London area at Erith, at finally at Christ Church, Ealing, from 1921 onward. Westerby was also Secretary of the Hymn Tune Association. In addition to The Complete Organ Recitalist, he wrote a number of articles and other books, among them a follow-up volume:

How to Study the Pianoforte Works of the Great Composers (1913)

The History of Pianoforte Music (1927) 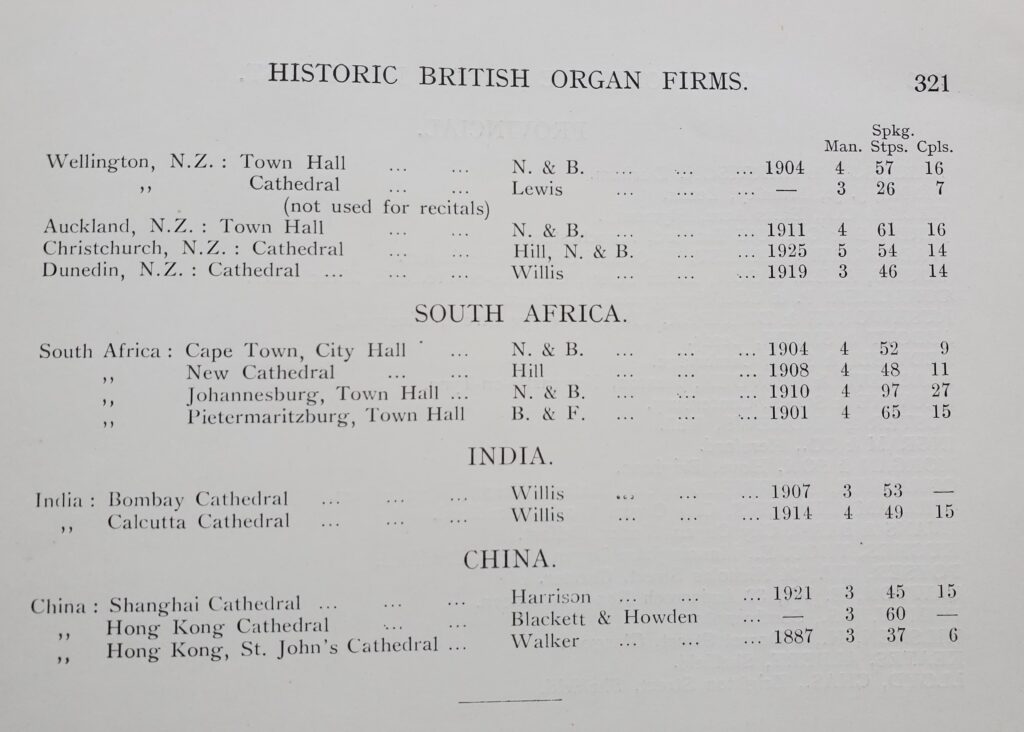 [1] Westerby has not been entirely forgotten as a musicologist. See: William Meredith. “The Westerby-Meredith Hypothesis: The History of the Eroica Variations and Daniel Steibelt’s Fortepiano Quintet, Op. 28, no. 2” The Beethoven Journal, 27/1 (Summer 2012). 26-44.