The Pipe Organ in China Project Website: Updates for January 2022.

During maintenance of the website this month, we discovered once again that a number of secondary pictures (the ones below the description/specs of the instruments) had been ‘tipped’ 90 degrees out of line. We still do not know why this is happening, and have gone through the entire Census of 194 organs to fix them. All these problems occurred in the First/Second Half of the 20th Century, and 2000— tabs, but strangely not among the earlier instruments. All photos are now placed in their correct orientation. We are also beginning to enlarge most of the secondary pictures in order to show more detail.

The page for HKG1935 has been updated, including the original specs for this W.C. Blackett installation, now rebuilt in a different hybrid form, and serving a church in Manila since 1959.

Photo of the Month: The memorial stone in the Xitang (西堂, West Church) in Beijing. The Latin text reads, in English translation, as follows (with thanks for Fr. Cyril for his helpful suggestions):

“To God, most good, most great: Teodorico Pedrini, priest of the Congregation of the Mission [CM, Vincentian, Lazarist], teacher of the children of the Kangxi emperor, out of his own funds erected this church in AD 1723, dedicated to God under the patronage of Our Lady of Seven Sorrows; and which, during the time of the persecutions of the Jiaqing emperor, was completely destroyed in 1811.

After this, in AD 1867 the Most Reverend [Joseph Martial] Mouly CM built a new church in this place, which was burned to the ground by the Boxers on 15 June 1900, with Father Maurice Doré CM, parish priest of this church, cruelly murdered.

Then, in AD 1912, through the beneficent gift of Rosalie Branssier of the Daughters of Charity, this third church, under the title of Our Lady of Mount Carmel, was built.

To whose memory, the Most Reverend [Stanislaus] Jarlin CM, Vicar Apostolic of Beijing, has erected this stone.”

A Happy New Lunar Year of the Tiger (which begins on Feb. 1) to all our friends and visitors! 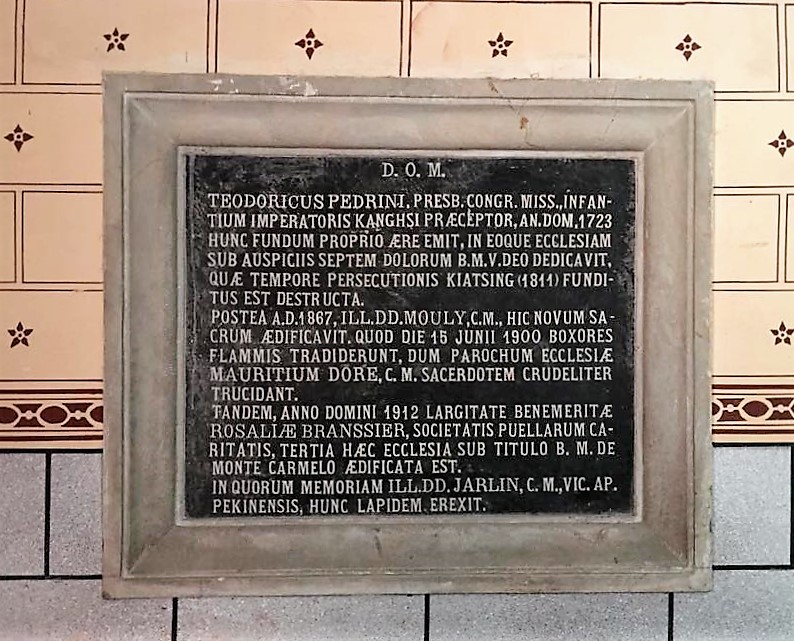 The memorial stone of Bishop Stanislaus Jarlin in the Xitang.