The Pipe Organ In China Project: Updates for August 2022

The Hong Kong Chapter of the American Guild of Organists held a Summer Organ Academy for Adults in July and August. The final students’ concert was held on 21 August on HKG1986 at the Academy for Performing Arts, and included works by JS Bach, Boëllmann, Geoffray, Karg-Elert, Mathias, Felix Mendelssohn, Schack, Stanford, Louis Viérne, and René Vierne, played by 10 of the participating students.

After some period of debate, The Project has decided to include the playable pipe organs presently at the Gulangyu Organ Museum in Xiamen, Fujian Province, in the Census (FCW2017 was already added some time ago.) While these organs have nothing historically to do with China (other than that they are found at present in Xiamen), the fact that they are present is enough, we have concluded, to include them in the Census, just as those that no longer exist, or which have left China, are similarly included. As with the relocated organs in Beijing, Tianjin, and Ningbo, these organs will receive a Census date reflecting their installation in China when confirmed, and not that of their original construction. We have added FCW2005 to the Census this month. The other two pipe organs of which we are aware (a Mackenzie, Lee & Kaye, originally built in 1874 and enlarged several times, and a Wurlitzer Model H of 1928, both ex-Australian installations), have not yet been confirmed as actually up and working at the museum.

The discovery of HKG1896 this summer led Prof. Urrows to do a bit of research on Oscar Crispim Baptista (1861-1929), organist at the Roman Catholic Cathedral of the Immaculate Conception from at least 1888 to his death in 1929. He reports as follows:

As far as I can tell, Baptista was born in Macau, which means that he was a Portuguese national. It is of course possible that somewhere in his family there may have been some Japanese or Chinese forebears (the China coast term, ‘Portuguese’, commonly meant in the 19th and early 20th centuries a person of mixed ethnicity). But just how long his family had been settled there is at present unknown. Baptista turns up on the 1895 juror list for Hong Kong, living on Elgin St. in present-day Central, although it is known that once he married, he moved to Hart Avenue in Kowloon. At any rate, he seems to have come to Hong Kong as a relatively young man.

Baptista worked for a brokerage company, Gibb, Livingston & Co., and what musical training he had is unrecorded. Baptista is the “R. Oscar” mentioned by Vittorio Facchetti as one of the ‘collauditori’ (testers) of the completed 1896 organ at the Roman Catholic cathedral. Why Facchetti referred to him in this way is not known, but he may have thought he was a priest (‘R.’).

His brief obituary notice (in the South China Morning Post, 11 October 1929, see below) shows that Baptista died in Macau. But he was in fact buried in Hong Kong. I might add, that I found that I share a birthday with Baptista, 25 October. This is the Feast of St. Crispin (and St. Crispinian), whence Baptista’s interesting middle name, Crispim. I only discovered this by dragging myself in the heat of a Hong Kong summer to St. Michael’s Cemetery in Happy Valley, and locating Baptista’s tomb (and that of his wife, mother-in-law, and only son, see photos below). 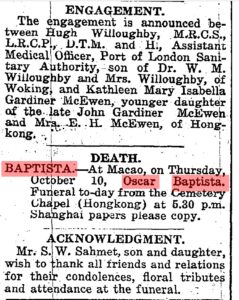 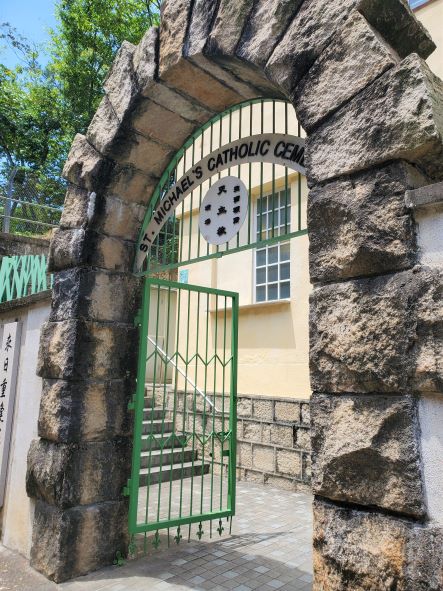 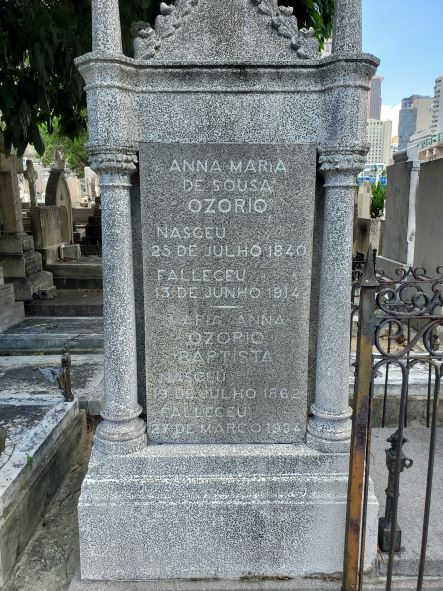 Names of Baptista’s mother-in-law and wife. 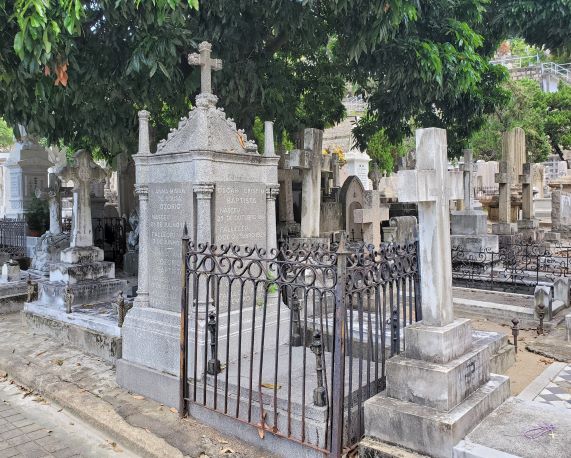